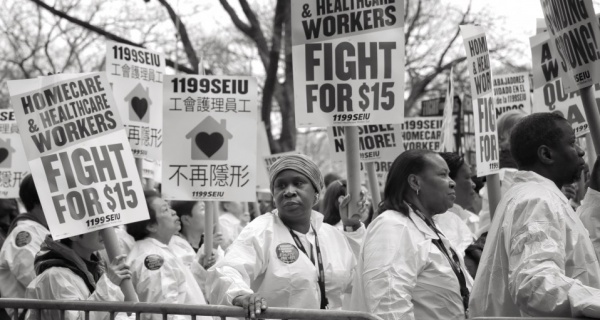 The latest jobs report showed a robust 266,000 workers were hired last month, an impressive figure that kept the country’s unemployment rate at 3.2 percent, the lowest its been in decades. Likewise, Black unemployment was hovering around its lowest levels ever, with November’s 5.5 percent unemployment rate inflating by just one-tenth of a percentage point from the month prior.

However, camouflaged in the good news was some not-so-good news, economists said. Despite the latest gaudy unemployment numbers, an apparent lack of so-called “good jobs” has resulted in a surge of hiring to fill low-wage positions. The Economic Policy Institute (EPI) responded to the November jobs report with a somber reality check for those celebrating the low levels of unemployment.

“Nominal wages rose 3.1% year-over-year in November, which is slower than expected in an economy that has had historically low unemployment,” EPI wrote before continuing. “It is important to remember that periods of stronger wage growth for production/nonsupervisory workers in this recovery tend to be followed by periods of relatively weaker growth. Definitely a promising sign if the stronger trends continue, but the slowdown for all private-sector workers is still troubling.”

That, of course, didn’t stop President Donald Trump from tweeting about a “GREAT JOBS REPORT!” But if the president had truly been paying attention, he might not have been so quick to claim victory.

The Brookings Institute last month released its analysis of the American economy and found that even “as the U.S. economy hums along at a favorable pace, there is a vast segment of workers today earning wages low enough to leave their livelihood and families extremely vulnerable.” Brookings went on to write that “53 million Americans between the ages of 18 to 64—accounting for 44% of all workers—qualify as “low-wage.” Their median hourly wages are $10.22, and median annual earnings are about $18,000.”

William E. Spriggs, the chief economist for the AFL-CIO union and a professor of economics at Howard University, tweeted how exactly low-wage jobs adversely affect African Americans and Black women in particular.

It was important to remember that while Black unemployment was among its lowest levels ever, at 5.5 percent it was still head and shoulder over the jobless rates for both white people (3.2 percent) and the national average of 3.5 percent.

Aside from low wages, another concern was the economy’s longer-term health and the risk of a recession, which would disproportionately affect Black workers in particular. Notwithstanding, Trump’s looming impeachment along with the employment repercussions from his trade war with China and series of misguided tariffs has helped the racial wage gap continue to widen.