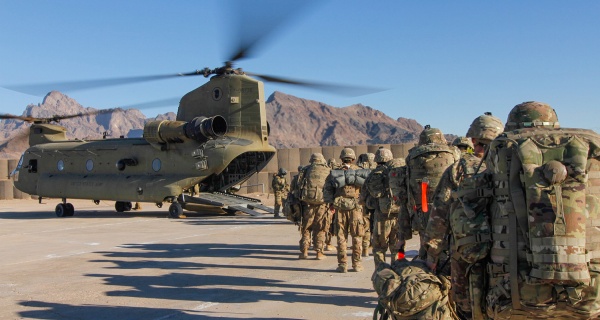 Whether you’re a fervent nationalist or citizen-of-world internationalist, this story should inspire some alarm:

Russian efforts to weaken the West through a relentless campaign of information warfare may be starting to pay off, cracking a key bastion of the U.S. line of defense: the military.

While most Americans still see Moscow as a key U.S. adversary, new polling suggests that view is changing, most notably among the households of military members.

Overall, the survey found 28% of Americans identified Russia as an ally, up from 19% the previous year.

So a significantly larger portion of the military–nearly half!–sees Russia as an ally than does the general public. If your first reaction is that this is part of a tribalistic Trump effect on a constituency that leans conservative overall, you would be right.

Generally, the pollsters found the positive views of Russia seemed to be “predominantly driven by Republicans who have responded to positive cues from [U.S.] President [Donald] Trump about Russia,” according to an executive summary accompanying the results.

While a majority, 71% of all Americans and 53% of military households, still views Russia as an enemy, the spike in pro-Russian sentiment has defense officials concerned.

It’s easy to sound the alarm over this for basic national security reasons. From a traditional Westphalian perspective, it is clearly dangerous for the people we entrust to secure the country’s self-defense to be much more favorable to our fiercest geopolitical foe than the public. It should be the other way around. It is beyond alarming when put in the proper context: one of the country’s two major political parties was just assisted in the previous election by its greatest foe; the president who was elected by a minority of voters with that rival’s help has continued to run interference for that rival, has been weirdly obsequious to its dictatorial leader, has refused to accept his own intelligence services’ findings about the criminal theft of opposition documents in the election, and is to this day extorting and undermining a nation in a hot war with that same rival power in an effort to fabricate dirt on a political rival for the next election and, amazingly, to frame the victim of the extortion for the crimes of its rival aggressor.

Trump has embroiled his personal lawyer, his Attorney General, his Vice President and his Secretary of State in the conspiracy as well. And all of this is occurring even as the president rules under a cloud of suspicion about his own personal and business financial ties to the same rival power.

And now, due to purely partisan interests, the nation’s military is being warped into supporting the hostile foreign power–against our own values, geopolitical interests, and intelligence services It’s like the plot from a bad spy novel, except that it’s happening right out in the open. This is the situation as it stands between Trump, Russia, the Republican Party and Ukraine. And no one can do anything about it because the Republican Party sees itself as locked into a demographic death spiral as it sheds support from every demographic except the declining share older, white, exurban evangelicals, and is therefore willing to defend even the most abominable behavior in exchange for nominating a slew of extremist radical judges who they hope will derail any progressive priorities for the next several decades.

But even this understates the cause for alarm. Because Russia isn’t just a geopolitical foe: it is also the global leader of white supremacy and fossil fuel kleptocracy. It is an international criminal syndicate operating as a government, and it is actively recruiting allies and henchmen all around the world. As I said last year, it’s not so much that the United States lost or is losing the Cold War (we didn’t lose it), as much as that racist plutocrats won it:

In order to pacify the populace during this process, Putin and allies used the standard timeless conservative tactics: they allied themselves with rural and socially conservative religious elements, ramped up hostile rhetoric toward supposedly corrupt outsiders, leveraged racist and sexist sentiments against domestic minorities and women’s rights groups, and portrayed themselves as the only ones who could make Russia great again.

It was unsurprising, then, that a Russian government-aligned with racist, sexist and plutocratic principles would find an easy friend in Donald Trump and the American Republican Party. They are natural allies. It is less that America became Russia’s client state, than that the conservative movements in both America and Russia made a semi-secret criminal global compact that neither could acknowledge publicly. Since Trump’s election, their wealthy patriarchal white supremacist movement has sought and encouraged allies in Britain, Europe, Brazil and elsewhere, seeking to align the world against socially inclusive economic progressivism in favor of plutocratic ethnonationalism.

The American white supremacist movement has long looked to Russia and Putin as friends and allies. They see Western Europe as engaged in the destruction of the white race through liberal immigration policies, of male dominance through an embrace of feminism, of rural fossil fuel power through embrace of policies designed to fight climate change, and of conservative Christianity through cultural secularization. They see America as destined to follow along on the same path, and they see Russia (as well as a few former Eastern Bloc countries like Poland and Hungary) as the only major world power to be moving in the other direction, asserting the privileges of wealth, patriarchy, orthodox fundamentalism, and fossil fuel extraction industries. There is nothing they would like better than for an America in a conservative counterrevolution to abandon NATO and align wholeheartedly with Putin. Trump’s hostility to Merkel and Macron is seen as a feature, not a bug: his subservience to Putin an advantage.

In this sense, Trump is not just pushing the military toward favoring a rival nation-state that is actively sabotaging our own for his own personal and political benefit. He is attempting to align the military with a global white supremacist, patriarchal fossil fuel-backed mafia syndicate. It’s almost certain that he is also hoping that in a Constitutional crisis pitting Western secular liberal values against said syndicate, that the military will help overthrow democracy itself on the syndicate’s behalf.

We aren’t there yet. But another four years of Trump in the White House could have very dark consequences for the entire world. It can happen here.