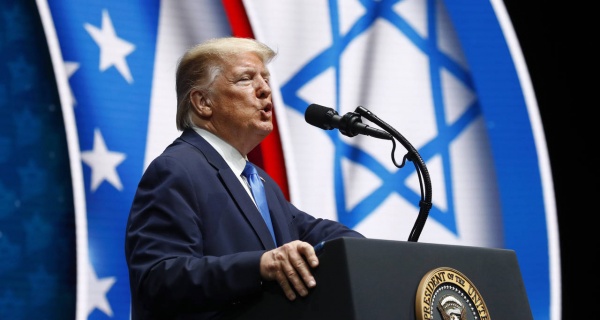 Critics accused President Donald Trump of playing to anti-Semitic tropes during a speech Saturday in Florida at a conference sponsored by the Israeli-American Council, where he said many Jewish Americans do not "love Israel enough."

"We strongly denounce these vile and bigoted remarks in which the president – once again – used anti-Semitic stereotypes to characterize Jews as driven by money and insufficiently loyal to Israel," said Halie Soifer, the executive director of the Jewish Democratic Council of America, in a statement.

Soifer's group is currently running an ad that calls Trump the "biggest threat to American Jews," and she said his comments Saturday "only reinforce" that belief.

In his address, Trump said the "Jewish State has never had a better friend in the White House" than himself, and he listed his acts since taking office, which he thought demonstrated that friendship.

As he discussed his choice of David Friedman as the U.S. ambassador to Israel, Trump told the crowd in Hollywood, Florida, "We have to get the people of our country, of this country, to love Israel more."

"We have to get them to love Israel more because you have people that are Jewish people, that are great people – they don’t love Israel enough. You know that."

Later in the speech, Trump discussed his decision to move the U.S. Embassy to Jerusalem and claimed he used his real estate acumen to save the taxpayers money on the location.

"A lot of you are in the real estate business because I know you very well. You’re brutal killers. Not nice people at all. But you have to vote for me, you have no choice."

The Israeli-American Council is nominally nonpolitical, but prominent Trump supporter and casino mogul Sheldon Adelson, along with his wife, Miriam, pledged $76 million to the council this year. At several points in Trump's speech, the crowd chanted, "Four more years" – and at one point chanted, "12 more years," at the president's urging.

"The President of the United States is incapable of addressing Jewish audiences without dipping into the deep well of anti-Semitic tropes that shape his worldview," the liberal-leaning group J Street said in a tweet.

"We’re not going to hold our breath waiting for Trump's supporters to speak out. We are going to work tirelessly to defeat this president and those who’ve enabled him 11 months from now," the group added in a second post.

Soifer took particular issue with Trump's "audacity to suggest that Jews 'have no choice' but to support him."

"American Jews do have a choice, and they’re not choosing President Trump or the Republican Party, which has been complicit in enacting his hateful agenda," she said.

"An overwhelming majority of Jews are both pro-Israel and anti-Trump because of his incendiary rhetoric targeting our community and others, and because his symbolic gestures on Israel have not made America or Israel more secure," Soifer added. "American Jews also reject President Trump because he’s emboldened the rise of white nationalism in America, which has directly led to increased hatred and violence targeting Jews."

About two-thirds of Jewish Americans are Democrats or lean Democratic, according to Gallup, which found Trump's approval rating among Jews to be around 30% during the first three years of his administration.

The Pew Research Center found 42% of U.S. Jews thought Trump was favoring Israel too much in the conflict between Israelis and Palestinians.

Trump has said he is committed to finding a resolution to the issue and has put his son-in-law Jared Kushner in charge of the U.S. role in negotiations.