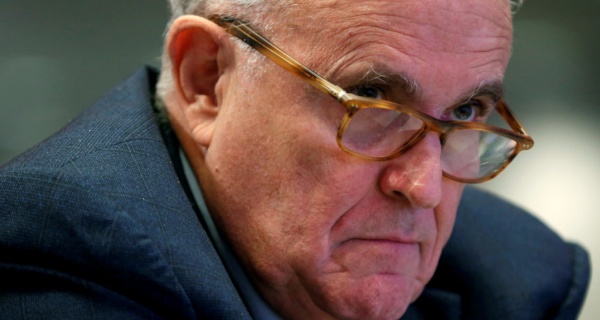 Trump’s personal lawyer met with Ukrainian prosecutors this week in an effort to discredit the impeachment inquiry and shift the focus to Trump’s rivals.

If most people were in Rudy Giuliani’s position—under criminal investigation and at the center of an impeachment case against his client, Donald Trump—they’d likely choose to lay low for a little while. But not Rudy! The Trump attorney has not only maintained his public profile and continued to interact with reporters (sometimes unintentionally), but he has also continued to brazenly engage in the very behavior that got him and the president in trouble in the first place.

On Wednesday, just as impeachment hearings kicked off in the House Judiciary Committee, the New York Times reported that Giuliani embarked on a trip to Kiev this week to meet with former Ukraine prosecutor Yuriy Lutsenko, who’s under investigation for corruption, in an effort to discredit the impeachment inquiry and shift the focus to the president’s rivals. Sources told the Times he also sought to meet with former prosecutors Viktor Shokin and Kostiantyn H. Kulyk, who are also under investigation, and all played a role in promoting conspiracy theories about Joe and Hunter Biden. Apparently the trip was intended to be part of a documentary series—perhaps along with his podcast project?—to promote Trump and argue that he should under no circumstances be impeached. The series is being produced by One America News, a right-wing outlet; an OAN crew reportedly accompanied Giuliani on the road.

One doesn’t need to be a lawyer to recognize that this may not have been the best idea. As a general rule, when being investigated for potential criminal activity related to Ukraine, it is wise to steer clear of Ukraine. It’s also probably best not to taunt your investigators, as Giuliani did in a text to the Times on Wednesday: “If S.D.N.Y. leaks and Democrats’ threats stopped me then I should find a new profession,” he wrote. “Like a good lawyer, I am gathering evidence to defend my client against the false charges being leveled against him.”

It’s hard to know what Giuliani is thinking here. That he’ll somehow manage to avoid the fate of goons like Michael Cohen and Paul Manafort, who are both behind bars ostensibly for going all-in on Trump? Does he genuinely believe he’s untouchable, or that the president won’t turn on him at the first sign of trouble—a process my colleague Gabriel Sherman reported yesterday has already essentially begun? We may never know!