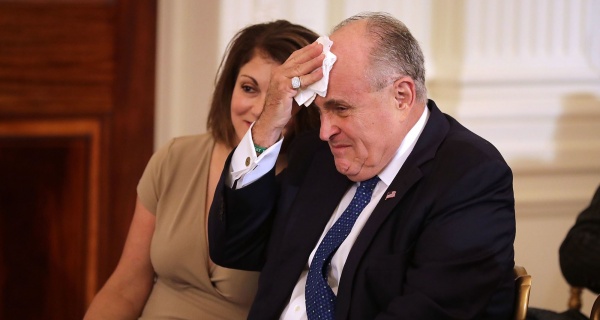 For more than a year, Jared Kushner and Ivanka Trump have been part of a chorus of West Wing advisers telling Donald Trump that he needs to fire Rudy Giuliani. “Most people around Trump have tried to say Rudy is not a positive,” a former West Wing official recently told me. Trump ignored their criticism and stood by his personal lawyer, even when Guiliani gave erratic interviews that often required messy walkbacks. “He liked him on television,” the official said.

But as Giuliani’s legal woes mount, Trump is coming around to his advisers’ view that Giuliani is a liability, three Republicans close to the White House told me. The relationship has grown so strained that Trump has even directed Giuliani not to appear on Fox News, a Republican briefed on the conversations said. (A Fox source said Giuliani has declined producers’ requests to appear on the network in recent days). “Rudy is cut off from Fox News,” the Republican told me. One Republican close to Trump put it this way: “We had to do something, we don’t want Rudy out there. Every time he talks it’s bad for Trump.”

The turning point seems to be Giuliani’s Fox News interview on November 23 in which he claimed to have an “insurance policy” in case Trump throws him overboard. “Trump was pissed,” a source told me. Giuliani tweeted that his comment was “sarcastic” and later called Trump to apologize. The next day, the news broke that Giuliani associate Lev Parnas had turned over tape recordings of Trump and Giuliani to Congress. Then, on November 27, the New York Times reported that Giuliani tried to land business deals in Ukraine at the same time Trump assigned him to conduct a shadow foreign policy campaign to pressure Ukraine to investigate the Bidens. Trump, sources said, was furious. “Trump hates when people make money off working for him,” a second former West Wing official said. (The White House did not respond to a request for comment.)

Giuliani did not respond to a request for comment. But a person close to Giuliani said that he is not worried about the federal investigation into his Ukraine work and that his relationship with Trump is as close as ever. “Trump is not mad at him,” the source told me. “Who are Trump’s defenders? You got Gingrich, Giuliani, and Huckabee. Rudy’s critics would love nothing better than for Rudy to disappear.” When I asked about the insurance policy, the source said: “Everything Rudy has is a benefit to the president.”

While Giuliani’s future in Trumpworld has grown darker, Mike Pence’s has brightened. According to sources, Jared Kushner and Ivanka Trump’s effort to draft Nikki Haley to replace Pence on the 2020 ticket has fizzled. During her book tour month, Haley stoked speculation that she was positioning herself to replace Pence when she torched Trump nemeses, Rex Tillerson and John Kelly, while lavishing praise on Trump. (“In every instance that I dealt with him, he was truthful, he listened and he was great to work with,” Haley said on the Today show.) The thinking was that Haley appealed to suburban women, a crucial demographic Trump fares poorly with.

But Republicans close to the White House told me Haley had made the determination that joining the ticket, or even replacing Mike Pompeo as Secretary of State, would be a net negative for her 2024 ambitions. “She wants to stay out of politics for the next several years and make some money while maintaining optionality for ‘24,” one Haley adviser said. “Nikki is running in 2024 come hell or high water,” a former West Wing official said. “If Trump loses, she’s already positioned herself as his heir apparent. Why not suck up to Trump. She can neutralize Pence as the Trump person. That’s a huge win.”