In The Age Of Trump, Hate Crimes Are More Personal And Violent 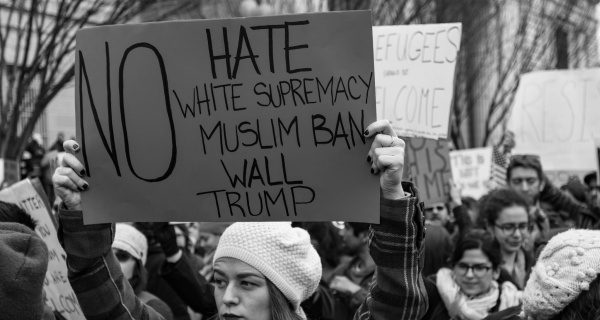 The era of Trumpian politics has not only unleashed a powerful tide of hate crimes in the United States, but a recent study finds that it’s also changed the nature of both the acts and the perpetrators: They are more directed at human beings, and concomitantly are becoming much more violent.

A survey of the past decade’s hate crime statistics recently published by the Center for the Study of Hate and Extremism at California State University, San Bernardino, found that “person-directed hate crime rose 11.8 percent, for a fourth consecutive time, to a 16 year high of 4,571—accounting for 61 percent of 2018 hate crimes.”

“We’re seeing these person-directed crimes hit a 16-year high at a time when, for instance, property destruction, vandalism and criminal mischief dropped 19 percent,” observed Brian Levin, the study’s co-author. “What I think that signals is that we not only have a shift in offenses, but a shift in offenders.” Those offenders, he told Daily Kos, are now less likely to be acting out violently as part of social-group bonding and are far more likely to be “lone wolves” radicalized online. That means their acts are directed more at individual members of targeted minorities and less at property or businesses.

“The time when groups of young people with shallow prejudices that are willfully unfocused and whose motivation included just peer validation and in-group bonding, and who would be more likely to commit these kinds of atrocities, has otherwise kind of diminished somewhat,” Levin said.

The sharpest increase has involved simple assault, which rose 14.7% over the last years, and 10% over the decade. Aggravated assault rose 3.8% from 2017, and intimidation increased 12.8%. Meanwhile, vandalism declined 37% from 10 years ago.

Levin particularly noted that these assaults are largely evenly distributed across all targeted groups, with the exception of Muslim Americans, who are targeted at an unusually high rate. “The bottom line that is so striking is we’re seeing a diversification in terms of who’s being targeted, and the increase in assaults is being spread fairly evenly across all groups,” he said. “African Americans and Jews still had an increase in assaults, even though they had a decline in numbers of incidents. And this is happening at a time when both crime overall and violent crime is declining. Moreover, Jews had a record year for homicides.

“So I think what we’re seeing is various interlocking shifts—one is in offenses to more violent ones and threatening ones, and the other is these assaults are even hitting groups where crime is going down. But among some groups, like Latinos, assaults were up 42%.”

The forces behind these shifting targets are social and political in nature, Levin says—particularly the scapegoating of various minority groups such as Hispanic immigrants, Jews, and Muslims by leading political figures and media. In particular, he sees a connection between Donald Trump’s rhetoric—often echoed and amplified in right-wing media—and the changing nature of hate crimes.

Hate crimes experts have long connected Trump’s rhetoric to the significant rise in hate crimes that began in 2015, when he first announced his candidacy, and that reached an unmatched intensity in the month immediately after his election in 2016. These levels have not decreased in the months and years since then, due largely to a seemingly steady diet of rotating targets.

“So a couple of years ago, when Islamist terrorism was at the forefront of the rankings with regard to issues the electorate was interested in, we saw an increase in hate crimes against Muslims and Arabs that had a head-and-shoulders top in 2016,” Levin said. “That now seems to be dovetailing with a complementary increase in anti-Latino crime just as immigration has hit at or near the top of the issues that are important to the electorate.

“The electorate is very fragmented and divided, but they’re also engaged earlier in their polarization.”

Levin said that this is not merely a matter of speculation, but shows up in the numbers. “We can track this through FBI data around certain events,” he said. “Think of November 2016, the worst month for hate crimes in 11 years, including that plot to blow up a refugee community in Kansas. Similarly, in England, around the Brexit vote, we saw a similar spike around that as well.

“It’s fluid to track, but when 4chan was the go-to place, we saw a spike in various kinds of bigoted epithets there that correlated almost identically with the increase that we saw in hate crimes, right around election time. It was almost like an overlay on top of each other.”