The 'Other' Victims Of The So-Called Border Crackdown 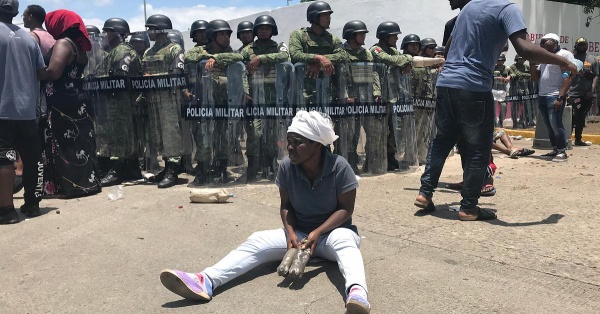 Henry Atum learned the meaning of “mañana” from the Mexican officials who every day for two months denied him the paperwork he needed to travel to the U.S. border, telling him to try again tomorrow.

He’d fled a brutal war in Cameroon in May, flying first to Ecuador and then walking north through the jungles of Panama’s Darien Gap. He passed the corpses of fellow migrants who’d risked the same deadly journey. He’d been robbed and cheated along the six-week trek.

But his journey reached a new low in Mexico.

“What I experienced here in Mexico is even worse than the jungle. We were taken hostage in Mexico,” said Atum, speaking from a run-down hotel in Tijuana, where he arrived in October in what he described as a lucky break.

Under the Trump administration, African migrants fleeing government persecution would have a much stronger claim to asylum than, say, Central Americans fleeing gang violence. But first they need to make it through Mexico to the U.S. border. Currently, more than 2,000 African asylum-seekers are stranded in southern Mexico trying to get permits that would allow them to travel north to the U.S. border.

A dwindling number who’ve made it north face new roadblocks, including adding their names to a months-long waitlist to apply for asylum in the U.S. In Tijuana, migrants report being extorted for amounts of $300-$1,500 in order to get a higher number on the waitlist.

Unfamiliar with Spanish, thousands of miles from home, and easily identifiable because of their skin color, Africans are especially vulnerable to being detained, assaulted, and blackmailed by hard-line or corrupt Mexican officials.

Atum, a grammar school teacher, blames Mexican officials for the way he’s been treated. But he said he thinks the U.S. is the one dictating the immigration policies. “We know when the U.S. coughs, Mexico catches a cold,” he said.

In August, Mexican officials stopped giving African migrants documents that allowed them safe passage through the country for 21 days. Instead, officials started telling them they must regularize their status while in southern Mexico or leave the country through Guatemala.

A former high-ranking official with the Department of Homeland Security said the agency was concerned about the influx of African migrants crossing the border. But, he said, much of their efforts were concentrated on pressuring Brazil to stop allowing Africans to enter without a visa, which would in effect prevent them from traveling north to the U.S.

Over the summer, Mexico began taking drastic steps to stop the flow of migrants reaching the U.S., by deploying its National Guard to stop them and giving out fewer humanitarian visas.

Mexico’s new stance has left African migrants in a state of permanent limbo.

“Mexico is saying you can’t leave southern Mexico but also we can’t deport you,” said Caitlyn Yates, a researcher at IBI Consultants who has studied U.S.-bound African and Asian migrants.

Mexico’s National Institute of Migration rejects this view, saying it has given more than 205 permanent resident visas to so-called “stateless” migrants since Nov. 7, up from 79 such visas in October. Nearly all the migrants deemed “stateless” are from African countries that don’t have embassies in Mexico.

But most Africans don’t want permanent residency in Mexico, because that could make winning asylum in the U.S. much harder, according to legal experts.

That’s left African migrants in a lose-lose position: They’re unable to leave southern Mexico without receiving permanent residency in Mexico, but they risk torpedoing their asylum case if they go that route.

“Under U.S. asylum law, people who have been firmly resettled in other countries can be barred from their application,” said Gretchen Kuhner, director of the Institute for Women in Migration, a Mexico-based advocacy organization.

That grim outlook is leading some African migrants to hire smugglers or pay off Mexican officials.

“There is no way for them to move forward without paying an extortion fee,” said Yates.

Africans aren’t necessarily singled out for extortion, said Ryan Krause, a human rights observer with the advocacy organization Al Otro Lado, but they have added pressure to cut a deal.

“If anything is forcing people to pay to cross more quickly, it is the difficulty of surviving in Tijuana for four and a half months, which is especially challenging and dangerous for migrants of color and those from outside of Latin America,” he said.

“We had no food, no shelter”

Many without the money to pay bribes are forced to live and wait in makeshift tent camps and hotels in Tapachula, in southern Mexico, some having already spent upwards of $5,000 and months of travel just to reach Mexico.

“We had no food, no shelter,” said Clinton, a migrant from Cameroon who was stuck in Tapachula for two months. He asked to withhold his full name because he’d reached Tijuana on a fake ID he bought for $300. “If the police catch you without documents, they lock you up unless you have a huge amount of money.”

The U.S. is an unlikely country for African migrants to seek asylum given the long and dangerous journey. Many fly to Ecuador or Brazil — which have more relaxed visa requirements — and then travel north by foot and bus. The journey requires passing through the Darien Gap, a perilous stretch of jungle straddling Colombia and Panama that also serves as a drug-smuggling corridor.

But over the past five years, a growing number of asylum-seekers have risked the trek as Europe’s closed-door immigration policies forced them to seek new options. In the first nine months of 2019, Mexico apprehended 5,849 African migrants, compared to 2,791 in all of last year. In 2013, Mexico apprehended 545 migrants from Africa.

“Security forces are burning villages and attacking people they believe to be supporting separatists,” said Richard Moncrieff, Central Africa project director for the International Crisis Group. He speculated that the increase in Cameroonian migrants trying to reach the U.S. was the culmination of a “steady state of violence” for two years.

But instead of finding asylum, nearly all those lucky enough to escape have experienced more abuse on their journey toward the U.S.

Iverson, a Cameroonian refugee who reached Tijuana in October, said he was told he had to pay $600 just to add his name to the waitlist of asylum-seekers, and that if he paid $1,300, he could pass into the U.S. within two weeks. How much the migrants pay “depends on your bargaining power,” said Iverson, who asked to withhold his last name because he worried that talking about the bribes would hurt his case.

Kenfack Jean, a Cameroonian migrant who’s been waiting nearly five months in Tijuana for his number on the asylum waitlist to be called, said he rarely leaves the motel where he rents a room. He’s scared Mexican immigration will detain him and send him back to Southern Mexico.

“It’s a psychological prison,” he said.