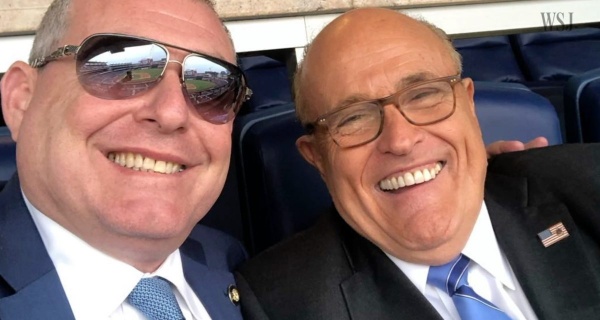 On MSNBC Saturday, a panel discussed Rudy Giuliani’s business dealings — and noted that the fact Giuliani has worked for so many clients for free is only reason to be more suspicious.

“All of these impeachment witnesses that have come forward, like Kurt Volker and Gordon Sondland, have said the president directed us to work with Rudy Giuliani,” said Politico reporter Andrew Desiderio. “And that’s something that Republicans have found very difficult to counter. And some of them have had the foresight from months to tell the president, look, Rudy Giuliani is bad news for you, he might end up getting you impeached, and look where we are right now. And that’s a message that Republicans have been sending him for a while. And then they’ve relayed back to me and said, the president loves Rudy, they are loyal to each other, they’ve been loyal to each other for so long, the president’s never going to dump Rudy.”

“Let me read the protestation from the former prosecutor, Rudy Giuliani, on Twitter, as these reports came out in the Post and the Times,” said anchor David Gura. “‘I did NOT pursue a business opportunity in Ukraine, as they misrepresented. I could have helped them recover $7B in stolen money, but I didn’t. Was paid ZERO. They attack me because I’ve exposed their hypocrisy & how they covered up Biden’s massive corruption!’ Well, here’s a guy who works for free for a lot of people, doesn’t he? Be it the president or the government of Ukraine.”

“First of all, that is what I actually wanted to say on this television show today,” said Business Insider reporter Linette Lopez. “Aside from the fact that Rudy Giuliani sounds crazier than a bag of scorpions on meth, we have to think about what he’s doing here. The president is not paying Rudy Giuliani, but he’s trying to get all these Ukrainian oligarchs and a Venezuelan billionaire … all of these people are paying him, but the president doesn’t pay Rudy Giuliani?”

“When you log on Facebook and it’s for free, you know that your data is getting sold, you know that advertisers are paying for your eyeballs. You are not the customer, you are the product because it is for free,” continued Lopez. “Donald Trump is not the customer of Rudy Giuliani, he is the product. He is what is getting served to the people who pay Rudy Giuliani. So, yeah, okay, I guess Trump enjoys being carved up and served up to Turkish billionaires and shady Venezuelans and Ukrainian oligarchs. Trump has been selling his services to people like that his entire life, so maybe that doesn’t bother him, but for the American people, knowing that the president is the product should be pretty disturbing.”