Trump Is A Messiah To The American Right 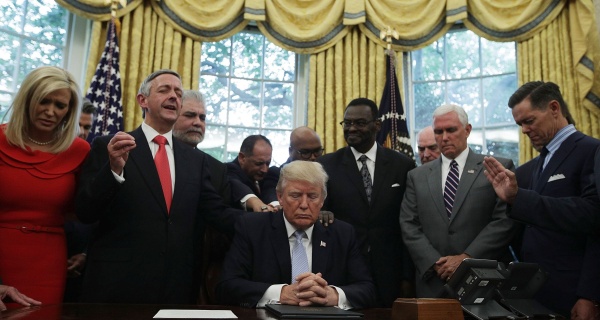 The Divine Right of Rulers isn’t a new concept—it’s one of the oldest and worst political tricks in the book. So when Energy Secretary Rick Perry appeared on Fox News and referred to President Trump as the “chosen one” and “sent by God to do great things,” no one should have been shocked. Of course, Perry is just echoing Trump himself. Already, he’s referred to himself as, “the second coming of God” and “the chosen one.” Those in his base, who are evangelical by a large margin, have yet to be upset by these characterizations. Perhaps that’s because Rick Perry and Co. genuinely believe it.

It’s this kind of messianic understanding of leaders that has long been detrimental to the success of nations. And, generally, it comes to the forefront when a nation’s religious becomes desperate for success in the polis. Politicians know this all too well—it’s why Adolf Hitler strategically painted himself as Germany’s messiah, sent to lead them from their despairing economic position on the world stage. Tragically, most of the German public bought in wholesale. Due to intimidation and denial, this brainwashed community became the worst bystanders in recent memory, as the Holocaust was orchestrated right under their noses.

Divine authoritative rhetoric like this creates a toxic relationship between a politician and his or her constituents. Claiming to be sent from God, or even pretending to be god-like, should no longer be a political tool of persuasion because of its ability to allow politicians to distort reality. The shunning of this type of discussion is long overdue even if President Trump, or any president for that matter, is a so-called saint.

Christians who supported Trump remain divided about their overall feelings toward the president. But, let’s not forget that, throughout Trump’s previous scandals like his lewd comments about groping women, evangelicals didn’t seem swayed.

Some Evangelical thinkers are consistently claiming that Trump is the “modern-day Cyrus” who is best-fit to guide the United States through chaos. In the sixth century BCE, as chronicled in the Old Testament, Cyrus conquered Babylon and ended Jewish captivity, after the Israelites had been forcibly resettled in exile. Jews were then returned to Israel to build a temple in Jerusalem. This theory of Trump as the new Cyrus has little logic, if any.

Obviously, President Trump is not a god-like figure, not even close. It’s strange that those who claim to know God would ever make such a dangerous comparison. In so doing, they’re eliminating the cap on the executive abuses he could commit. He can slowly morph the presidency into a dictatorship.

Most recently, through the impeachment hearings, we have gotten another taste of this unbridled religiosity. Republicans are arguing that not only did Trump not abuse his powers in the Ukraine scandal, but also that he can’t even abuse his powers, no matter how he exercises them. Of course, Trump agrees with that logic, because he asserts that he has “the absolute right to pardon [himself]” and he has the “absolute right” to completely shutdown the U.S. Southern border. Is there any absolute right he doesn’t have?

Well, no. Not when he’s God’s chosen one. But if evangelicals continue to promote that message, they’re going to find themselves in for some very real trouble.