No, The Impeachment Process Is Not Political 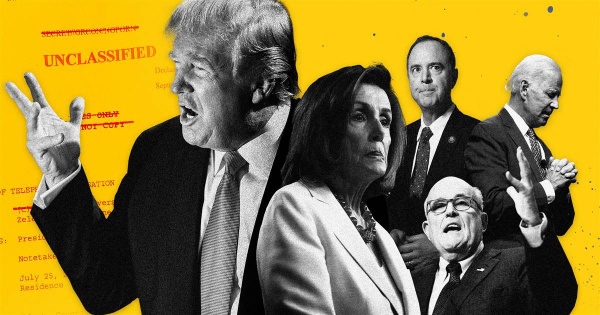 One of the things often heard about impeachment is that it is essentially a political process. This seeming truth is said with a kind of sleepy sapience, as though only the naïve or the self-deluded would imagine anything otherwise. So, this vein of argument usually goes, if the Democrats fail at the politics of the impeachment of Donald Trump—if they don’t produce enough sexy sound bites, or if, despite the evidence, they can’t persuade Republicans of Trump’s guilt in trying to use the State Department as a shakedown office for his reëlection campaign—then they will have failed utterly, and the blame will lie squarely with them.

Certainly, there’s a sense in which impeachment is a political process, in the same sense that any legal prosecution is partly political. Judges and juries are people with political opinions, and courtrooms are filled with people who share the sentiments and the prejudices of the moment. A prosecutor’s decision to undertake a case is always made with an eye to whether, given a typical jury and the evidence at hand, a conviction can be obtained. The evidence may be good but not good enough to convict. Or the evidence may be good enough but, given the public passions at the time and place of the trial, may not result in a conviction.

In this limited but universal sense, impeachment is political; it should be undertaken with an eye to the likely consequence of the jury’s decision. This is why Nancy Pelosi, a smart politician, was for so long dubious about the merits of launching an impeachment inquiry against Trump. There appeared to be no point in attempting to bring him to justice if justice would not be done.

But there’s another, more urgent sense in which impeachment exists as an alternative to politics. Recall that both modern-day impeachments in this country were launched against Presidents who had won overwhelming reëlection victories. Impeachment in this sense is anti-politics; it presumes that there exists a constitutional principle that overrules the politics of popularity. The point of an impeachment is not to do the popular or the poll-tested thing but to have the courage to do an unpopular thing, because what is at stake is a larger, even existential matter. When the Republicans impeached Bill Clinton—Senator Lindsey Graham, who was then a member of the House of Representatives, among them—they certainly at least acted as if they believed this to be true. (Though they, and he, are apparently not yet ready to admit that lying under oath in order to cover up an affair seems something less of a high crime than running a shakedown racket in a dependent foreign country.)

When the Founders were writing the Constitution, an impeachment that seems to have loomed large in their minds was that of Warren Hastings, the first British Governor-General of India. In a trial that ran, intermittently, from 1788 to 1795, in the British Parliament, Hastings was charged with a series of high crimes and misdemeanors that included corruption and what we would now call war crimes. Edmund Burke, a Whig member of the House of Commons—who was once a hero of the American right, though not usually because he was passionate about the well-being of colonized people against their colonizers—led the fight against him.

It was an impeachment that was, as Burke knew by the time it came before the House of Lords, doomed; in the end, just six peers found Hastings guilty, and on only some of the charges. Nonetheless, Burke pursued it, because the principle involved seemed to him so clear. Hastings took for a major aspect of his defense what, essentially, Attorney General William Barr has imagined for Trump’s defense. In Hastings’s case, this meant that, as the magistrate in power, he had a right to act without impediment. Executive power, being his, was his to use. Hastings claimed that right by appointment, although Trump does so by-election. But both men claim arbitrary power to act without any system of law or procedure to constrain them.

This, for Burke, was a mortal sin in government. No one could act by “whim” or desire outside a framework of fixed and transparent law. “Law and arbitrary power are in eternal enmity,” he told the Lords. “Name me a magistrate, and I will name property; name me power, and I will name protection. It is a contradiction in terms, it is blasphemy in religion, it is wickedness in politics, to say that any man can have arbitrary power. In every patent of office, the [idea of] duty is included.” All power is bound by duty; no magistrate—or President—can act badly and then just say that they do so by right. Impeachment is not a substitute for politics; it appeals to the principles of law and duty that make politics possible.

It is the unprecedented gravity of our moment, still perhaps insufficiently felt, that makes this confrontation essential, whatever the political consequences. Pelosi, too, now acknowledges this fact. As she told The New Yorker in September, about Trump, “He has given us no choice. Politics has nothing to do with impeachment, in my view.” The political consequences of impeachment are no longer the primary or even the secondary issue at stake; more important is the survival of the principle of the rule of law against the unashamed assertion of arbitrary power. Postponing a reckoning until the next election implies that what is at issue in Trump’s attempted extorting of the Ukrainian government are a series of policy choices, which voters may or may not endorse. According to this reasoning, if Watergate had happened during Nixon’s first term, and he had been reëlected anyway, attempted political burglary and obstruction of justice would have become acceptable practice. By invoking law against arbitrary power, the Democrats may not “win,” and who knows what the political outcome will be, but, as Pelosi says, there is no longer a choice. Law and arbitrary power remain in eternal enmity. You pick your side.