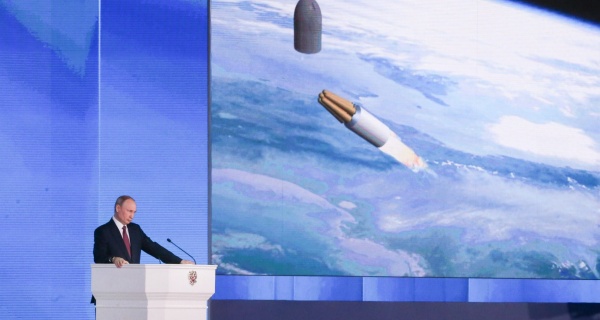 The Russian military has allowed U.S. officials to inspect a hypersonic nuclear missile that Moscow claims can evade any American military defenses.

According to Interfax, U.S. inspectors traveled to Russia this week on a two-day visit to see the weapon as part of the New START bilateral nuclear arms control treaty, which is set to expire in 2021.

Russian President Vladimir Putin has said his forces would be ready to deploy the hypersonic Avangard missile by the end of 2019. It is one of a host of futuristic weapons announced by Putin in 2018, as he sought to advertise Russia's supposedly growing military prowess.

Putin said the Avangard can fly at 20 times the speed of sound—or about 1 mile per second—thus defeating any existing missile defense systems. Russia's military also released footage of the weapon being fired from a silo in a test launch.

"The Avangard is invulnerable to intercept by any existing and prospective missile defense means of the potential adversary," the president said when announcing the existence of the missile.

The military also told Interfax that it still intends to put the Avangard into full combat duty by the end of 2019, in keeping with Putin's timeline. But its development has not been without problems, according to some reports.

A nuclear accident near the northwestern town of Nyonoksa in August may have been caused by an Avangard system. CNBC cited unnamed U.S. intelligence officials who said the accident—which killed five scientists and caused a local radiation spike—may have occurred as researchers tried to retrieve a missile from the seabed.

This week's inspection was conducted as part of the New START agreement, which came into force in 2011.

The treaty introduced a cap of 1,550 accountable deployed strategic nuclear warheads and bombs for both the U.S. and Russia.

The treaty will expire in 2021. Russia has said it wants to extend the agreement, though the U.S. has not yet said whether it is prepared to do so.

The two nations are already at odds over another anti-nuclear proliferation deal—the 1987 Intermediate-Range Nuclear Forces Treaty—from which both Washington and Moscow intend to withdraw.

The INF Treaty banned ground-launched nuclear and conventional missiles with ranges from 310 miles 3,417 miles, forcing the U.S. and Soviet Union to remove some 2,700 short- and medium-range missiles from the battlefield.