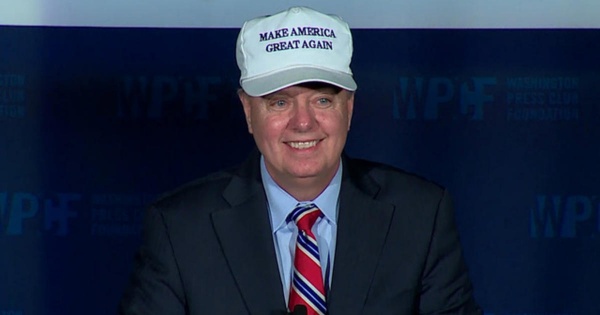 On MSNBC’s “AM Joy,” former Rep. David Jolly (R-FL) sharply criticized Sen. Lindsey Graham (R-SC) for reversing his prior position and deciding to launch a Senate probe of Vice President Joe Biden to deflect from impeachment.

“You can’t believe anything Lindsey Graham says,” said Jolly. “I mean, that’s the takeaway of these last three years … I’ve kind of moved on in my evaluation of Lindsey Graham. We sometimes think, oh, the principled person that Lindsey Graham used to be, but I now believe we can’t believe Lindsey Graham five years ago or ten years ago, where we used to think he was this constructively unpredictable politician, he’s actually the unprincipled Republican we’ve come to expect. He just did a better job of hiding it.”

“And so what he will do, by bringing the Bidens into the Senate, the narrative of the Bidens, even he doesn’t bring them to testify, is he will inject this conspiracy on the nation at a time when we’re facing a very hard constitutional question in a constitutional crisis, and rather than honoring the oath he took as a United States senator, he’ll be honoring his fealty to Donald Trump, but most importantly of all, he’ll be honoring his own self-interest in South Carolina. That’s all this is. He is the worst type of politician we’ve come to expect in the modern Republican Party.”