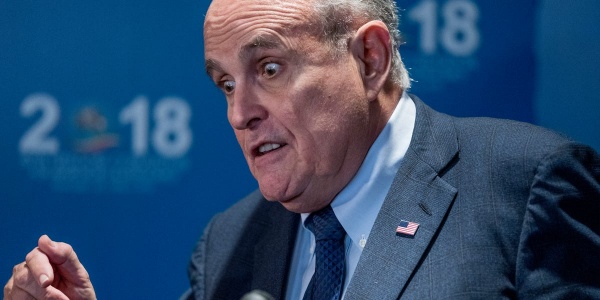 It’s telling that Donald Trump is seemingly the only one who has confidence in Rudy Giuliani.

At least, that seemed to be the case after Gordon Sondland testified as a key witness in the House’s impeachment inquiry on Wednesday. The Washington Post reported that the U.S. Ambassador to the European Union — which includes Ukraine, where the very impeachable quid pro quo scandal unfolded — said in no uncertain circumstances that Trump specifically directed officials to withhold financial aid until Ukrainians officials investigated former Vice President Joe Biden‘s family for personal political gain.

“Was there a ‘quid pro quo?’” Sondland asked rhetorically in his opening remarks before ultimately saying that “the answer is yes.”

Sondland’s testimony shared one common denominator with the other diplomats who have testified: Giuliani, with whom Sondland testified neither he nor his team wanted to work and only did so out of obedience to the president’s orders. Most of the witnesses have corroborated each other’s accounts that place Giuliani and Trump at the center of one of the most egregious presidential scandals in international history.

Now, Giuliani is being investigated by federal prosecutors for his alleged attempts to profit from the very investigations into Ukrainian energy projects that Trump insisted on in exchange for political capital that could affect the outcome of the 2020 election. Turns out Giuliani may have been the crook all along while trying to criminalize low-income Black and brown people he presided over as New York City mayor.

When Trump was a candidate, Black people warned America about who he really is – a lying, racist, xenophobic sexist. Trump has more than proven those attributes to be true, and then some, to the point that news outlets have been forced to revise their stylebooks to amend their definitions of what constitutes racism.

Now, with Giuliani, it can’t be ignored how loudly Black people also sounded the alarm about him dating back to the early 1990s. Guiliani’s track record with Black and brown people has been well documented, beginning in 1992 when he incited a race riot in New York City.

At the time, New York City had its first — and only — Black mayor in David N. Dinkins. Giuliani used that racial aspect to fuel the racist fire he was starting. That was just one of many unfortunate parallels between Giuliani and Trump, the latter of whom also has a long documented history of racism and discrimination against Black and brown people and used race — specifically that of his predecessor, Barack Obama, the nation’s first and only Black president — to fuel his candidacy.

Race riot and drastic cuts to social services notwithstanding, Giuliani’s time in New York City Hall also ushered in the now-unconstitutional Broken Windows policing practice of Stop And Frisk that has had immeasurable damage on Black and brown communities as part of a larger racist legacy the former mayor left behind that has still thrived. Giuliani has also gone on to utter such gems as saying that Black people are their own worst enemies and blaming Black fathers for racist police violence. “There’s too much violence in the black community,” Giuliani said on CBS’ “Face The Nation” in 2016. “A black will die 1% or less at the hands of the police and 99% of the hands of a civilian, most often another black.”

Fast forward a couple of decades later and Giuliani and Trump are the main characters starring in an international blockbuster of a political scandal that has vast implications for the country moving forward.

Chances are that Trump will be impeached but not removed from office if a partisan Senate acquits him as expected. But if there was ever a chance for America to make amends for ignoring the voices of reason that warned of Trump and Giuliani — two corrupting factors directly contributing to the decline of America’s it would be on Election Day 2020 to vote out Trump in favor of any Democratic candidate.