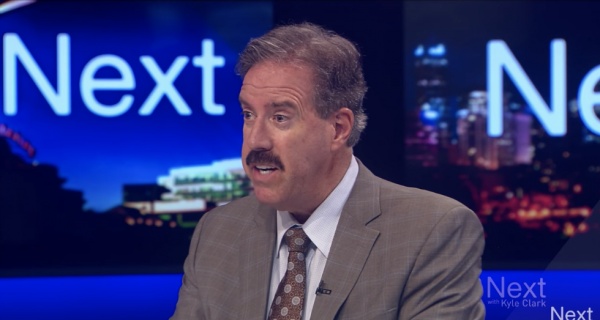 Silverman was in the middle of a segment about Roy Cohn, Trump’s former personal attorney, when he suddenly was interrupted by network news, he told The Denver Post.

Silverman’s producer threw his hands up in the air, indicating it wasn’t him.

Instead, program director Kelly Michaels came through the door.

The former prosecutor, who has hosted “The Craig Silverman Show” from 9 a.m. to noon on Saturdays for more than five years, responded to the sudden firing on Twitter.

“I cannot and will not toe strict Trump party line. I call things as I see them,” he tweeted. “I see corruption and blatant dishonesty by President and his cronies. I also see bullying/smearing of American heroes w/courage to take oath and tell truth. Their bravery inspires me.”

Representatives from KNUS did not immediately respond to a request for comment. The page for Silverman’s show appears to have been removed from the station’s website. A link to his show gives a “404 Error — Not Found” message.

Silverman’s last segment of the hour, before he was taken off the air, was to “observe how toxic Trump is in Colorado,” he said in a text. “And to continue my show theme today that Democrats are making a strong case at the House impeachment hearing.”

Silverman said he isn’t sure about the future of his show.

Silverman voted for Trump in 2016 and initially supported the president. But recent comments on Twitter, his radio show and in opinion pieces show his stance on the commander-in-chief has soured.

A Denver native, Silverman has been a lawyer in Colorado since 1981, spending 16 years in the Denver District Attorney’s Office, according to his biography. He ran unsuccessfully as an independent candidate for district attorney in 1996 and is an attorney with the Springer and Steinberg law firm.

Craig Silverman
@craigscolorado
Thanks Dylan. I cannot and will not toe strict Trump party line. I call things as I see them. I see corruption and blatant dishonesty by President and his cronies. I also see bullying/smearing of American heroes w/courage to take oath and tell truth. Their bravery inspires me. https://twitter.com/Dylan_RobertsCO/status/1195770413126758401 …

Rep. Dylan Roberts
@Dylan_RobertsCO
Sad day for Colorado and the First Amendment. Toe the Trump line instead of talking about law and facts if you want a show? “Sad, @710KNUS”...as our President would say.