Blacks For Trump: Why Is This Happening? 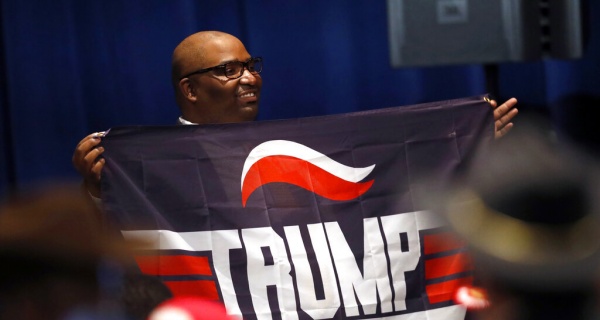 You know it’s campaign season when candidates start courting Black people to win their votes. The presidential trail to re-election has navigated Trump to recent destinations in the deep south like HBCU Benedict College where only a few students were actually allowed into the rally and most recently, to ATL because everyone knows if you’re looking for Black people…Atlanta is where you can locate a few.(and I say this as an Atlanta resident).

So, why were the first images to land in my feeds from the rally at the Georgia Hall of Congress pictures of White people wearing ‘Blacks for Trump’ shirts? The photos caused quite a stir on social media to the point that Snopes.com had to investigate to let people know the pictures were not fake or part of a hoax. Yep, those are real White people wearing t-shirts that read “Hell Yea I’m Black and I Like Trump”.

Why…why…why did this happen. According to USA Today, about 300 people actually attended the Blacks for Trump rally so there were plenty of Black people around who could have worn the shirts.

It’s not fostering unity…it’s not funny. It’s insensitive and almost as tone-deaf as some of Trump’s awkward comments to the crowd.

Trump reportedly said at one point that Blacks were leaving the Democratic party which only cared about them every four years to get their vote. Ummm…isn’t that exactly what Trump was doing.

He also pitched hard about his immigration plans saying he wanted to keep illegal aliens out. You would think a group of Black people who are just a couple of generations away from even being allowed to vote wouldn’t co-sign such rhetoric that sounds similar to what they said about Black people.

Still, there are Blacks who support Trump. According to a recent Gallup poll, about 1o% of Black voters support Trump. You have to wonder…who the hell are these people making up 10%. Are they deaf as well and didn’t hear about the chants of ‘go back home ‘ that Trump supporters have been shouting at people of color? Or maybe they think they are the exception and these chants don’t apply to them because they are some very fine people.

Trump’s launch of “Black Voices for Trump” will get a cluster of severely ill-informed people to rally behind him. Interestingly, some of the Black people in the crowd were wearing shirts that said “Woke”, But the fact that they were at a rally to support Trump makes you wonder if they actually sleepwalking as they joined the crowd in chanting four more years.