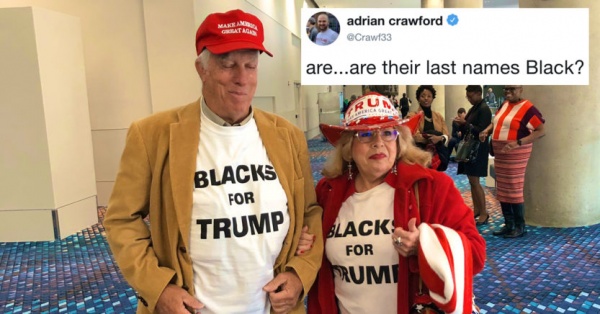 Trump supporters, during both his campaign and the permanent campaign hangover that is his presidency, have given us some truly iconic images. There’s the guy who showed up to MAGA rallies in a full-body spandex suit dressed like the border wall. There’s the grinning Trump couple sporting matching “f*ck your feelings” t-shirts. Now there’s one more—a surreal picture of a couple that appears to be very white wearing “BLACKS FOR TRUMP” shirts.

Trump traveled to Atlanta on Friday to attend the launch of the Black Voices for Trump Coalition, a Trump campaign group aimed at bolstering the president’s weak support among African-American voters.

Of course, because nothing about Trump can be said to be “weak” by Trump himself, the rally was less about Trump courting black voters and more about bragging that he was already winning them over.

During his remarks, Trump chided black voters for voting for Democrats instead of Republicans—88 percent to 8 in the last presidential election, according to the Washington Post—and suggested black support for Democrats was just “out of habit”.

According to the latest Washington Post-ABC News poll 89 percent of black voters disapprove of Trump's job performance with 80 percent who strongly disapprove.

But what caught most peoples’ eye in the crowd of the few hundred supporters who turned out for the event was one couple—who did not appear to be black at all—wearing “BLACKS FOR TRUMP” t-shirts:

According to Aungelique Proctor of FOX5 in Atlanta, the couple was from Miami, Florida.

Folks on Twitter were amused and (understandably) confused at the surreal image.

We probably shouldn’t be too surprised, Trump has been trying to convince voters that up is down and black is white for his entire presidency.

Watch the video below: Trump supporter is destroyed.