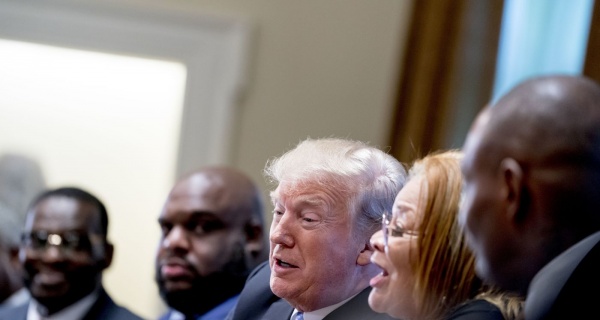 Donald Trump is trying to secure the sunken place vote in Atlanta with a new African American coalition.

According to WSBTV, Trump will launch the Black Voices for Trump Coalition this Friday with a rally at the Georgia World Congress Center. He’s expected to put a spotlight on recent statistics that show Black unemployment rates at a record low. He will also highlight an opportunity zone program listed in the Republicans’ 2017 tax-cut legislation that will allegedly encourage business people to invest money into struggling areas. This is the same legislation that was heavily criticized as benefiting corporations and the wealthy rather than workers.

But the Black M.A.G.A’s will still come. Mike Pence is also scheduled to speak at the 3 p.m. event.

According to senior White House officials, Trump’s campaign targeted Atlanta for his rollout because of its reputation as an epicenter for Black life. However, not every Black person in Atlanta is feeling Trump or the Republican party. In fact, most Black people have voted against them. During the 2018 gubernatorial election, Democratic nominee Stacey Abrams won 94% of the Black vote over her Republican opponent Brian Kemp, according to an exit poll.

In the 2016 presidential elections, only 8% of Black voters cast their ballots for Trump and, according to a 2018 Pew Research Center poll, only 8% of Black voters identify in some way to the Republican Party. A poll by The Associated Press-NORC Center for Public Affairs Research also demonstrated that only 4% of African Americans believe Trump’s actions and policies have benefited Black people.

Let’s also not forget Trump’s insults to Atlanta when he described the congressional district that spans the city as being in “horrible shape and falling apart.” This came not too long after U.S. Rep. John Lewis, D-Atlanta, said he would boycott Trump’s inauguration.

Trump will still have his supporters though, including Alveda King, the niece of the Rev. Martin Luther King Jr., and Bruce Levell, a Dunwoody jeweler who was behind Trump’s Black outreach group in 2016. Along with the rally, Trump is also expected to have a roundtable discussion that will run supporters $100,000 to attend. A luncheon will also be hosted that will cost attendees $2,800 and a donation of $35,000 if they want a picture with Trump.