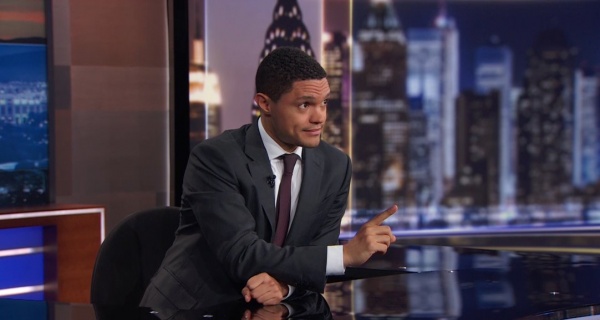 Trevor Noah unpacked and countered Kanye West’s claim that black people have been “brainwashed” into voting for Democrats on The Daily Show‘s interstitial bit, “Between the Scenes” Tuesday.

In a recent interview, the radio DJ Big Boy asked West about his support for President Donald Trump, to which the rapper replied, “We’re brainwashed out here, bro. Come on, man. This is a free man talking. Democrats had us voting Democrats with food stamps for years.” Moments later, while ostensibly ticking off Democrat “priorities” he dislikes, West seemed to conflate the morning-after pill, Plan B, with abortion (a blatantly false claim the anti-abortion movement loves to make anyway), and even claim that Democrats are “making us abort our children.”

On The Daily Show, Noah tackled West’s “brainwashed” comments in particular, countering, “What is more likely, the fact that these people are brainwashed, or the fact that, in America, you have to vote for the system that gives you the best chance… You may not even like all of the Democrat positions, but you’re like, ‘Yeah I’m voting for my best shot.'”

Noah added that, for someone like West, it’s possible to reach a point where you’re rich and famous enough that certain Republican policies don’t affect you as much, and maybe even outright benefit you. The host then capped off his argument by noting, “You know who doesn’t mess around with their votes in America? Black women.”