Being Attached To Trump Is Hurting McConnell's Support In Kentucky 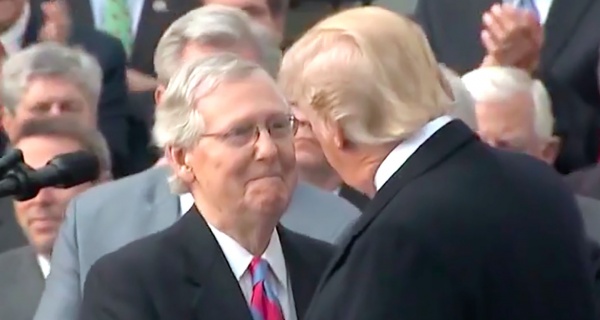 Senate Majority Leader Mitch McConnell (R-KY) may have put himself in a box by becoming one of Donald Trump’s most vociferous defenders, which has, in turn, caused his popularity to collapse in his home state and made his re-election prospects dicey.

According to a column by the Daily Beast’s Margaret Carlson, new state polling shows support for McConnell — the longest-serving U.S. senator for Kentucky in history — at historic lows.

“The poll showing that Senate Majority Leader Mitch McConnell, the president’s most stolid defender, is down to an 18 percent job approval rating in Kentucky. Only 37 percent in the Public Policy Poll said they would vote for him again next year,” she wrote, adding that McConnell’s numbers should serve as a warning to all GOP lawmakers no matter how conservative their states are.

“The Bluegrass State is the canary in the mine for how much Trump can help, or hurt, a candidate as his impeachment looks ever more likely. After two weeks of unimpeachable civil servants bearing witness to an impeachable president, clinging to Trump out of fear he will kill you if you don’t do what he says is becoming more politically perilous,” she wrote before pointing out: “McConnell’s facing his toughest race since he first won election in 1984.”

As such, McConnell has moved ever-so-slightly away from Trump, with Carlson writing, “As his poll numbers have dropped and his re-election bid looms, McConnell has made ever so slight moves to distance himself from Trump, whose whims now extend to the slaughter of our erstwhile allies, like the Kurds and Ukrainians. Somewhere inside the old McConnell lives a patriot and institutional loyalist appalled that Trump has deputized a shadow government staffed by rogue operators like Rudy Giuliani and his now-indicted pals. To those ends, McConnell recently refused to confirm Trump’s claim that McConnell said his Ukrainian call was ‘innocent,’ or to agree that impeachment is a “lynching.” He hedges his criticism of impeachment by objecting to the process.”

Unfortunately for McConnell, as she writes, should things go south for Trump, McConnell will likely be dogged by the fact that his wife, Elain Chao works in the Trump administration as Secretary of Labor and because of a fundraising email he sent out using stopping Trump’s impeachment as a hook for donations.

“McConnell already put his eggs in Trump’s basket with an ad buy in which he brazenly asks for money with the promise that ‘the way that impeachment stops is a Senate majority with me as Majority Leader.’ So much for swearing to be an impartial juror, and good luck deep-sixing that ad in the same file where Trump aides tried to hide the transcript of the Ukrainian call,” she wrote.

“McConnell’s become so comfortable doing the wrong thing, it may be too hard for him to switch to the right one, to risk being labeled ‘human scum’ as Trump calls his Republican critics and to endure Trump’s red-faced rage, on the gamble it will help him,” she concluded adding, “If Trump keeps sinking, he will have to do something. If he’s more frightened by an approval rating in the teens than Trump’s fury, it will be the right one.”