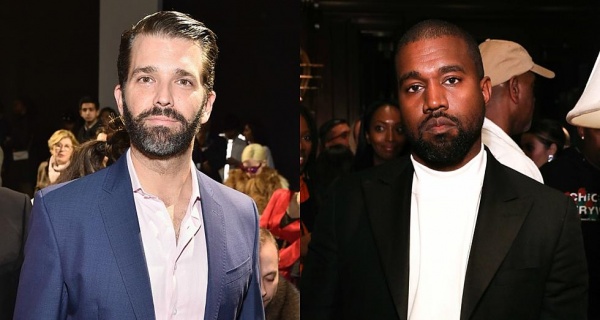 Kanye West has morphed into gifted rapper from Chicago who talked about classism and racism to the face of the Christian right. Now he has a friend in Donald Trump Jr. who claims the rapper is being silenced by “leftists” — even though West has been getting tons of press, his new albums have been trending for days and he’s received tons of media attention. Nonetheless, this equals “silence” to Donnie Jr.

Donnie Jr. babbled on Twitter, “Kanye West is cracking the culture code.@kanyewest’s new album #JesusIsKing is the epitome of fearless creativity and “dangerous, unapproved” ideas. Leftists always try to silence those who are speaking truth. They’re waging a war on our family and culture. Kanye is a pioneer.”

Yep, Donnie Jr. is somehow an expert on culture.

Ridiculously, people on Donnie Jr.’s team appear to believe if you challenge someone like — who said slavery was a choice, Malcolm X wasn’t relatable and has repeatedly admitted to not voting a day in his life — that it is somehow silence. Furthermore, the rapper also made disgusting comments about the Black community, welfare and Democrats, even though more whites are on welfare. He also, with no facts, argued Democrats make African-Americans “abort their children,” even though more white women get abortions.

The rapper has released his new album “Jesus Is King.” He recently told Zane Lowe on Apple Music’s Beats 1, “Now I’m letting you know what Jesus has done for me,” he said. “I’m no longer a slave. I’m a son, now, a son of God. I’m thinking of something I wanna say out loud — Christian innovator. When you’re thinking about the church—because it has to stand on the word so hard — it loves to be extra traditional to the point of blocking innovation.”