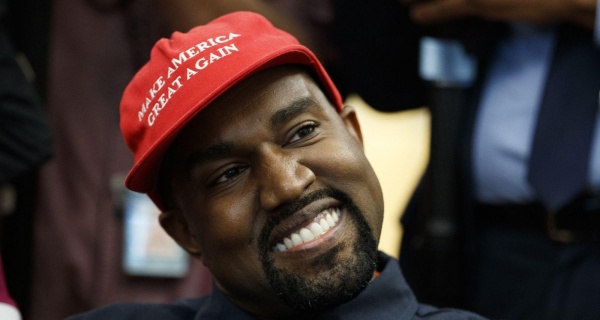 West claimed without evidence that Democrats are forcing Black people to abort their children and seemed to confuse Plan B with abortion.

We get it, Kanye, you're religious now. You've started a quasi-church and your new album is literally called Jesus Is King—never mind that some have compared you to a televangelist who's simply commodifying faith. But now we're learning what kind of religious West is, and it's dad who shares anti-abortion Facebook posts.

In an interview with radio host Big Boy released on Friday, West claimed without evidence that Democrats are making Black people abort their children and seemed to confuse Plan B, or emergency contraception that prevents pregnancy, with abortions that end an existing pregnancy.

Big Boy asked West, who has been supportive of Donald Trump in recent years, what West would say to people who think the rapper has turned his back on the Black community. He gave a rambling answer that included a mention of how Disney bought up land in Florida before saying:

“We’re brainwashed out here, bro. Come on, man. This is a free man talking. Democrats had us voting [for] Democrats with food stamps for years. What are you talking about? Guns in the 80s, taking the fathers out the home, Plan B, lowering our votes, making us abort our children…Thou shall not kill."

There's a nonzero chance that West thinks Plan B (aka the morning-after pill) causes abortions since the next thing he mentions is "lowering our votes," referring to fewer Black people voting, then talking about abortion again. Conflating Plan B with abortion is an anti-abortion talking point that medical groups are continuously working to debunk.

Watch it for yourself—it starts at 10:20 in the clip below:

But medical inaccuracy aside, an accusation from one of the most famous rappers alive that Democrats are somehow forcing Black people to have abortions is irresistible fodder for anti-abortion groups who unsurprisingly jumped on the interview. Live Action called it "breaking" news on Facebook and Twitter (they also amusingly quoted West as saying "Gosh, they're now killed"). The Daily Wire celebrated West's "trashing" of abortion while Students for Life welcomed West "to the good side." Both Live Action and Students for Life slapped their logos on the clip because, branding.

It's only a matter of time until Trump glowingly tweets about West being "pro-life."