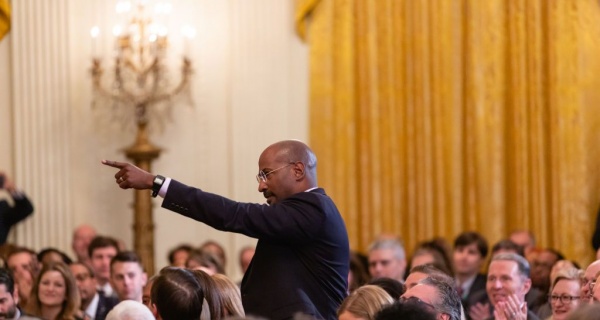 Van Jones obviously has an issue with anyone insulting Trump -- his "uniter-in-Chief." So, he decided to attack Sen. Kamal Harris.

Donald Trump made a speech yesterday at Benedict College, an HBCU in Columbia, South Carolina, which included over 200 of his allies and only 10 students (seven attended). In addition, just days after comparing his impeachment to a “lynching,” he actually received an award at Benedict — the “Bipartisan Justice Award” — for his so-called work in criminal justice, which included rolling back countless criminal justice reforms.

Sen. Kamala Harris was not here for it and Van Jones decided to get petty on Twitter.

Harris was scheduled to participate in Second Step Presidential Justice Forum at Benedict College. However, she said in a statement, “As the only candidate who attended an HBCU, I know the importance that these spaces hold for young Black Americans.” Harris attended Howard University.

“When it became clear Donald Trump would receive an award after decades of celebrating mass incarceration, pushing the death penalty for innocent Black Americans, rolling back police accountability measures and racist behavior that puts people’s lives at risk, and then learned all but ten Benedict students are excluded from participating, I cannot in good faith be complicit in papering over his record,” Harris said.

Van Jones, who once called Trump the uniter-in-chief, wrote on Twitter, “Running away from a conversation has never solved anything. Some people will abandon a microphone because they don’t like the person who touched it last. Others are smart enough to grab that microphone and make sure THEY get the last word.”

@VanJones68
I will be there, too, @CoryBooker ... Running away from a conversation has never solved anything. Some people will abandon a microphone because they don’t like the person who touched it last. Others are smart enough to grab that microphone and make sure THEY get the last word.

Jones’ worship of Trump on criminal justice is insane considering 45 rolled back Obama-era prison reform policies. For example, the Justice Department will use private prisons to house federal inmates, which reverses an Obama-era policy. In addition, as The Washington Post reported, the Trump administration has “Overturned the sweeping criminal charging policy of former attorney general Eric H. Holder Jr. and directed his federal prosecutors to charge defendants with the most serious, provable crimes carrying the most severe penalties reports.” President Barack Obama made more criminal justice reforms than any president in the U.S.

Trump also ended the 21st Century Task Force on Policing, commissioned by the Obama administration to address tensions between police and the communities they serve. Former Attorney General Jeff Sessions and Trump rolled this back under their “law and order” mandate. The current AG — William Barr — is even more horrific on criminal justice.

Twitter was not happy with Van. One user wrote, “Van Jones, this is a disgusting take. It isn’t about who held the mic last. Trump was given a criminal justice award at an HBCU and he’s a well-known racist. All but 10 or less students were even allowed to attend. Don’t knock down Kamala Harris for standing up to such hypocrisy.”

Another added, “So protesting a bigoted racist that is being awarded for anything justice-related at an HBCU is running away? Take your passive-aggressive ass to the Kanye side of the aisle where y’all can tap dance together.”

Thankfully, Harris has formed her own criminal justice roundtable for today, which will host students from around Columbia, S.C., and Benedict College students are also invited.

According to a tweet from Washington Post reporter Josh Dawsey, only nine students were confirmed and seven attended.

@jdawsey1
From Trump pool: "Your local pooler was able to get an updated number of Benedict College students who attended the remarks Friday. Benedict College spokeswoman Kymm Hunter told your pooler that nine students were confirmed, but two had ROTC training, meaning seven attended..."

According to Fox 5, students were even told to not leave their dorms from 1 p.m. to 4 p.m. See below:

Sooji Nam
@sooji_namtv
“As an African American, I feel very unsafe.” She is a freshman at Benedict College and said students were asked not to leave their dorm rooms between 1pm-4pm. @wachfox