Trump's Visit To Historical Black College Was A Spectacle 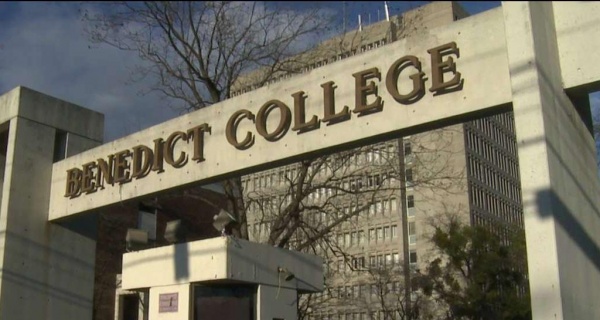 Donald Trump had the nerve to show his face at Benedict College, an HBCU in Columbia, South Carolina, after comparing his impeachment to a “lynching.” However, despite some students wanting to know what Trump might say, only a handful was allowed to attend — at least 10 — and just seven showed up, according to one report. The president was speaking in a space that fits 300 people.

“10 Benedict College students would get admission but added that 200 Trump allies would be filling auditorium seats,” the State reported Friday. Yep, Trump filled the room with his friends.

However, according to a tweet from Washington Post reporter Josh Dawsey, only nine students were confirmed and seven attended.

@jdawsey1
From Trump pool: "Your local pooler was able to get an updated number of Benedict College students who attended the remarks Friday. Benedict College spokeswoman Kymm Hunter told your pooler that nine students were confirmed, but two had ROTC training, meaning seven attended..."

The HBCU says it has “2,100 students enrolled” at the school.

Some students were open-minded to him attending. Eighteen-year-old freshman Deondre Brunson told the State that, “It’s a great opportunity for students to meet the president of the United States. Just talk to us.”

@sooji_namtv
“As an African American, I feel very unsafe.” She is a freshman at Benedict College and said students were asked not to leave their dorm rooms between 1pm-4pm. @wachfox

SCNAACP State Conference President Brenda C. Murphy tried to warn folks. She said in a statement, “What an unexpected, unpleasant situation for students, the community and many citizens of this state to experience after his insensitive remarks regarding being “lynched” by the Democratic Party,” she said. “What a hell of a statement to make.”

She also added: “We must continue to be skeptical of his actions that have already adversely impacted on the lives of many people of color and others financially disadvantaged. We must be unwavering in our awareness of his actions that limit our civil rights. We are experiencing the eroding away of the rights that our forefathers fought and gave their lives for us to have the opportunity to advance educationally, socially and economically.”

“Maya Angelou said it best ‘When someone shows you who they are, believe them the first time’, and time and time again, he has shown us his unwillingness to promote unity among all people in our county,” Murphy said.

Yep, Trump showed people who he was — again.

Columbia, South Carolina Mayor Steve Benjamin actually thought Trump would arrive in the spirit of “grace.”
“In these incredibly difficult times in which we live, we may disagree fundamentally on many issues of public importance but I hope to use your visit to reach out in the spirit of bipartisanship & grace,” Benjamin said in a statement.

According to the NAACP, more than 4,700 lynchings occurred in the U.S. from 1882 to 1968. Of those who were lynched, more than 3,400 were Black, though not all lynchings that occurred were documented, the NAACP noted. Many of the White people who faced lynching were killed for helping Black Americans or for opposing lynchings.