Defeating Donald Trump: This Is Not The Time To Sit On The Sidelines 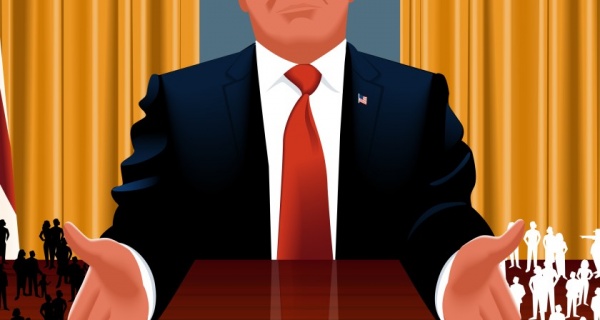 As the 2020 election approaches, the United States is deeply and bitterly polarized, shaken by acts of random and not-so-random violence, with wages still rising too slowly, income inequality continuing to increase and the American Dream feeling more and more out of reach for too many people. Despite low unemployment and a frothy stock market, voters feel a deep anxiety about the future and a dark anger at the political system.

With just a year to go before election day, global alliances are fraying as the U.S. turns inward. The culture wars are raging on campus and off. For only the fourth time in American history, a U.S. president is being investigated by the U.S. House of Representatives with an eye toward impeachment. Immigrants are being demonized and detained; homelessness is reaching crisis levels in big cities; and craven, self-interested lawmakers have Congress paralyzed, unable to act effectively on these and other policy issues, including the terribly urgent matter of climate change, which threatens our very existence.

All presidential elections are uniquely consequential, but a good case can be made that the next one is the most important of our lives. The time has come to undo the great mistake of 2016 and drive Trump out of office at the ballot box. It is time to pull our country out of the illiberal abyss into which it is sinking and put it on a path toward reason and fairness and empathy and constructive engagement with the world.

The nascent impeachment process, important as it may yet become, is by most current estimations unlikely to lead to Trump’s removal by the Republican-controlled U.S. Senate. And in any case, impeachment is not the preferred way of ousting a president in a democracy. Voters need to keep their eyes on the prize: defeating Trump state by state, issue by issue, vote by vote in November of next year.

But stopping him is not going to be nearly as easy as common sense says it ought to be. The country is profoundly riven: More than 60 million Americans consciously chose this president over his opponent four years ago. And many voters remain entranced — hoodwinked, in our view — by his blunt, cocky, overpromising style. He may be coddling dictators, selling off the planet to oil, gas and mining interests, cynically stirring racial resentment and animosity toward immigrants, and provoking an angry trade war with a rising China, but his base remains steadily, stubbornly supportive.

We need not explain here why Trump is temperamentally unsuited to be president — we have said it many times, including in our 2017 series “Our Dishonest President,” and we say it again today in a separate article.

Suffice to say, the country is in the hands of a president for whom everything is transactional, for whom anything and anyone can be bought and sold. Lies, threats and empty promises are his weapons of choice; enemies are mocked and belittled while the dumbly obedient are rewarded. Ignorant and incurious, unmoved by reasoned argument, contemptuous of laws and institutions, Trump is in thrall to exactly the special interests you would expect, he is schooled at the university of Fox News, he is on a constant search for adulation and short-term advantage. He must be defeated in November 2020.

At the moment, more than a dozen candidates are jostling for the right to take him on, saying that they have the strategy, the credentials, the money, the message — and all the other intangible and ineffable skills and qualities it takes to become president.

Some boast decades of experience; others are new to the national stage. Some may be damaged goods or past their primes; others may be charming and glib, but unseasoned or unprepared — that’s what the primary process is designed to clarify. There are a couple of long-shot Republican primary candidates — such as former Massachusetts Gov. William Weld — but the true challenge comes from the Democrats, whose field includes a former vice president, a couple of former prosecutors, a democratic socialist, some U.S. senators, a businessman and the mayor of a medium-sized city in the heartland. Among the serious contenders are an unprecedented number of black and female candidates. (Prepare to be told that they can’t win, but be careful what you believe.)

It goes without saying that the most pronounced divisions in the country are between left and right, between liberals and conservatives. But stark differences have emerged also among Democrats, who are now engaged in a heated battle for the soul and direction of their party. Does the country need a drastic overhaul or merely some reforms and a return to the Obama years? Should we abolish ICE? Socialize healthcare? Offer free college and a guaranteed income and a cancellation of all healthcare debt? Or are these promises unrealistic, unnecessary, outside the mainstream and likely to lose a candidate more votes than they win?

Now is no time to watch from the sidelines.
This debate between the progressives and the moderates is an important one; by all means, let’s have it. But on two issues, we hope the candidates will agree: first, that the top priority has to be defeating the incumbent, who is too irresponsible to be allowed another term; and second, that his defeat is only a first step. Even before Trump was elected, the country was divided and the old system wasn’t working. Political paralysis was already on the rise well before November 2016, symbolized by repeated government shutdowns, angry and bruising Supreme Court nomination battles, the gradual disappearance of moderate Democrats and Republicans, the decline of bipartisanship and the rise of incivility and rejectionism. Something needs to change. Anyone who is not convinced of that should just remember the name Merrick Garland.

This is the first article in a series by the Los Angeles Times editorial board taking on several aspects of the race to come. This is not our endorsement, which will be written later in the campaign. In this series we will seek to answer some basic questions: What is our brief against Donald Trump and why is it so important that he be defeated? How should voters think about the tricky question of “electability” — whether to vote for the candidate that most appeals to them or to vote more strategically for the one with the best chance of winning? We’ll begin to look at some of the policy issues arising in the race, we’ll examine the battle between progressives and moderates, and we’ll consider the importance of race and racism in the election. For Californians in particular, whose policies are especially loathed by this president and who have so often felt the brunt of his disdain, this election is supremely important.

Now is no time to watch from the sidelines. Voters must become engaged, learn the issues, choose sides, speak out. Removing Donald Trump from office in November 2020 is absolutely essential — and yet it is by no means a sure thing. So do not sit this one out. Join in, and make America America again.