Trump Is Using William Barr To Go After His Rivals 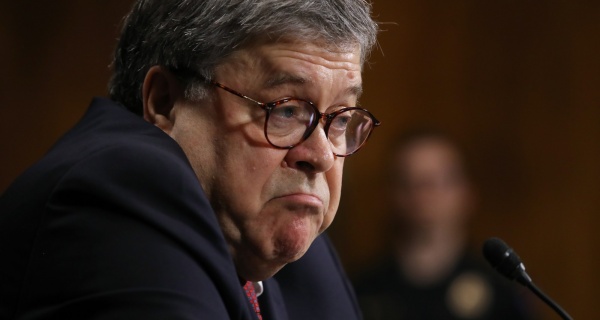 Donald Trump has been trying to discredit the Justice Department’s investigation into his campaign’s relationship with Russia for most of his presidency. His attempts to do so have mostly come through his Twitter account and yelling over Marine One on the White House lawn. But when Attorney General William Barr took over the Justice Department in February, it quickly became clear federal law enforcement resources would be used to go after the people who conducted the probe.

It didn’t take long. When Special Counsel Robert Mueller released his findings in April, Trump and Barr teamed up to misrepresent them. The following month, Barr tapped a John H. Durham, a U.S. attorney in Connecticut, to look into the origins of the investigation. Now, the New York Times reported on Thursday, Durham’s inquiry is no longer just an inquiry; it’s officially a full-scale criminal investigation.

In other words, the Justice Department is now investigating itself in service of the president’s political agenda.

When asked about the investigation Friday morning, Trump called Barr a “highly prestigious man” while defending the move to pursue criminal charges. “I think you’re gonna see a lot of really bad things,” he said.

Though, as the Times notes, DOJ guidelines hold that there must be an “objective, factual basis for initiating [an] investigation,” it’s not clear what — if any — evidence Durham was able to uncover that led the DOJ to launch an investigation into the origins of the Russia probe. But the distinction will give Durham the ability to issue subpoenas and put together a grand jury to file criminal charges.

What those charges might be are a mystery. Trump and his allies have propagated several baseless conspiracy theories that the Russia probe was launched illegally by Democrats working in tandem with corrupt officials within the Justice Department. Most recently, Trump has hammered the idea that Russia did not actually interfere in the election (despite that this has long been the conclusion of both Congress and the intelligence community), and that Putin was framed by Democrats upset Trump won the election. If this doesn’t sound like it makes much sense, it’s because it doesn’t, and it’s frightening to consider what kind of criminal charges Durham might try to wring out of the morass of reckless speculation surrounding the investigation’s origins that the president has tried to cram into reality.

None of this is surprising. Trump has made it clear since taking office that he sees the Justice Department as a tool to carry out his personal agenda. He repeatedly attacked Jeff Sessions, his first attorney general, for not doing more to stymie the Russia investigation, ultimately forcing his resignation. His subsequent nomination of Barr, a noted critic of the investigation who had demonstrated extreme views on executive privilege, was considered a play to take a more offensive stance toward the inquiry. Launching a criminal investigation into the origins of the investigation certainly qualifies.