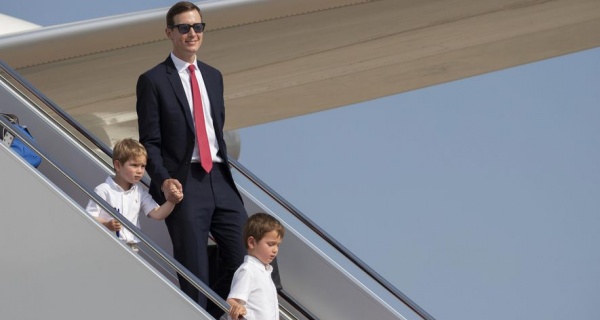 Not too long after Donald Trump described the late Elijah Cummings‘ Baltimore district as “a disgusting, rat and rodent-infested mess,” Trump’s son-in-law is now facing a lawsuit for his “rodent-infested” apartments in Baltimore.

According to The Baltimore Sun, Maryland Attorney General Brian Frosh is suing an apartment management company owned by Jared Kushner, who’s also a senior White House adviser. The suit says that the company routinely used “unfair or deceptive” rental practices while running rodent-infested apartments in Baltimore and the surrounding area.

Attorneys in the Consumer Protection Division of Frosh’s office explained in a statement that Westminster Management and 25 other companies whose properties it managed have “victimized consumers, many of whom are financially vulnerable, at all stages of offering and leasing” their rental spots in Maryland. The companies carried out “hundreds of thousands of violations” of consumer protection laws, the statement said.

Kushner Cos. CEO Laurent Morali said that the company would fight the lawsuit.

“We refuse to be extorted by an ambitious Attorney General who clearly cares more about scoring political points than fighting real crime and improving the lives of the people of Maryland,” he said. “We look forward to defending ourselves against these bogus allegations.”

Frosh isn’t scared though and he condemns the idea that he’s suing the company for political gain.

“They were cheating tenants before, during and after their tenancy, and when I tell you there were hundreds of thousands of violations of the Consumer Protection Act, it just begins to convey the seriousness of the charges,” Frosh said. “They caused serious harm and suffering to the people who lived in their units.”

Kushner, who’s married to Trump’s daughter Ivanka, stepped down from his real estate firm Kushner Cos. when he became a White House senior adviser in 2017. However, he didn’t divest from some of the firm’s properties, including Westminster Management, the main company in the Frosh complaint.

The firm revealed that it was first under investigation by Frosh’s office in 2017 when articles detailed complaints from tenants and other housing advocates. Ironically, the treatment of the Baltimore-area tenants resurfaced in July when Trump called Baltimore a “rat and rodent-infested mess.” Tenants under the Kushner company thought this was a good time to reveal that they were suffering from rodents thanks to Trump’s son-in-law.

Now, Frosh’s statement of charges says that tenants under Kushner’s company “have had to endure living in units that are infested by rodents and vermin, plagued with water leaks that have caused mold and other issues, and, at times, lacking in basic utilities.”

The statement further says some tenants “have experienced rodent infestations so severe that they have rodents living and dying in walls and kitchen appliances; damaging carpeting; chewing holes in drywall and screen doors; and leaving droppings on floors, countertops, and furniture.”

The statement also said Kushner-linked companies were in business without proper licenses and charged tenants illegal and other “sham” fees while renting out “distressed, shoddily maintained” apartments and townhomes under “conditions that can adversely impact consumers’ health and well being.”

Frosh’s office filed the charges within the Consumer Protection Division of the Attorney General’s Office. It will be put before an administrative law judge in the Office of Administrative Hearings in Hunt Valley. This judge will make legal conclusions in the case before sending it back to the Consumer Protection Division where personnel separated from the initial investigation will make a decision of the findings and assess damages, if any, for victims.

Frosh said damages could grow to millions of dollars considering the volume of the alleged violations. Any decision could also be appealed in state court. The companies listed in the lawsuit represent 17 apartment complexes in Maryland ran by the Kushner Cos. or managed by its affiliate, Westminster. The complexes collectively have around 9,000 units in Baltimore County, Baltimore city, and Prince George’s County.

Frosh encouraged tenants of Westminster properties to contact a consumer protection hotline (410-528-8662) for any more information.

“We would encourage any tenant that has experience with any of these entities to get in touch with us to let us know if they have had a good experience, a bad experience or something in between,” he said.