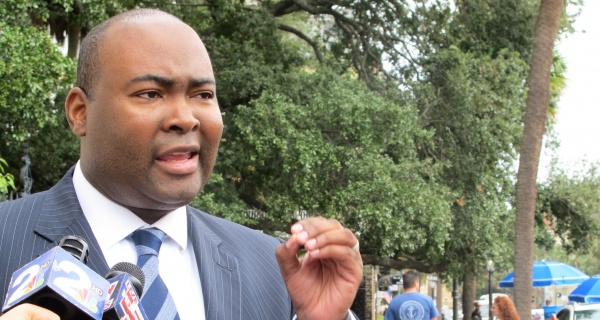 South Carolina Senator Lindsey Graham may soon learn that his plan to convert himself into Trump’s bootlicker wasn’t such a hot idea after all.

Although Graham is still currently the favorite to win in this safe Trump state, he is trending downward after several major embarrassments, with a historically low approval rating for an incumbent: 35%. Additionally, 58% said they want someone other than Graham representing them in the Senate. Although Graham remade himself into a sycophant, it has not helped him much as he tries to ride Trump’s coattails.

On the flip side, Democratic challenger Jaime Harrison has been steadily rising in the polls, with the latest national poll indicating that Harrison only trails Graham by seven points.

It’s easy to discount that polling, of course—it was commissioned by The Collective PAC, which is devoted to electing more black people to office, and executed by Change Research, which has just a C+ rating on FiveThirtyEight. Yet other numbers don’t lie. This quarter, Harrison raised $2.1 million, which is the largest amount a Democratic Senate candidate has ever raised in South Carolina. That fundraising tally breaks the previous record of $1.5 million, which was set by—wait for it—Jaime Harrison … in the previous quarter. On top of that, most of Harrison’s funding comes from small donors, unlike Graham, with over 60,000 donors giving an average donation of $26. That grassroots support means that, unlike with large corporate donors, Harrison can return to the well several times.

Next quarter’s numbers are expected to be even higher. That is why the Republican Party is now shaking down their donors, in an attempt to pour money into a race that the GOP believes should not be at all competitive, but also is historic: If Harrison wins, South Carolina will be the first state to be represented by two African American senators, with the other being Republican Tim Scott.

It has been pointed out that Graham has always been a “beta” male, who assumes a subordinate role to a strong “alpha.” That was a role previously owned by Arizona Sen. John McCain, but after his death, Graham decided his new “alpha” would be a man obsessed with insulting McCain … and a man whom Graham had previously called a “kook” and “unfit” to be president. Even McCain’s daughter Meghan called Graham a coward, adding that he isn’t the person she used to know.

With few exceptions, (Texas Sen. Ted Cruz come to mind), Lindsey Graham would be deemed too blatantly submissive to be a major elected official. He has been getting away with it due to the nature of deeply conservative South Carolina, but even the Palmetto State is seemingly getting fed up with him.

*Graham told South Carolinians that he backs Trump’s trade war 100%, even though he admitted that the state’s businesses were going to get hurt. Graham told them they needed to accept the pain.

*Graham fiercely defended Trump immediately after mass layoffs at a large South Carolina plant due to Trump’s multiple trade wars, which most of the state’s residents admit have been a disaster.

*Speaking of Trump’s trade wars, South Carolina is dependent on export income for soybeans, corn, and cotton. Farming bankruptcies are skyrocketing statewide, and Graham has done nothing to stem the bleeding.

*Graham has been continuously debasing himself, to the embarrassment of his constituents. He embraces wild internet conspiracy theories, he shamelessly defends everything Trump has done, even if it directly contradicts everything he has ever stood for. Trump’s genocide in Syria provided his biggest humiliation yet: After he sold his own soul in order to be named one of Trump’s advisers, Graham wasn’t even asked for input before Trump ordered U.S. troops to abandon Syria.

*This past week, Graham angered his fellow senators when he pitched a letter pledging total fealty to Trump, and promising that the GOP caucus won’t vote to remove him, no matter what crimes might be uncovered. One Republican senator said it was ”one of the dumbest ideas I’ve ever heard.”

But this is about Graham’s opponent.

Jamie Harrison is the complete opposite of Graham: a man of unquestioned integrity and character. He is fighting to ensure that every South Carolinian has access to affordable health care, good-paying jobs and student loan debt relief. He is a Yale-educated attorney who used to be a high school teacher. He is also very well-connected and popular as the former chair of the South Carolina Democratic Party.

How popular? To give you an idea, Harrison raised $240,000 within just 24 hours of announcing his candidacy with the amazing video below. Graham’s people were none too happy, but they weren’t worried.

This race has always been Graham’s race to lose. Thankfully, he seems to be working as hard as Harrison is to make sure that’s exactly what happens in 2020.