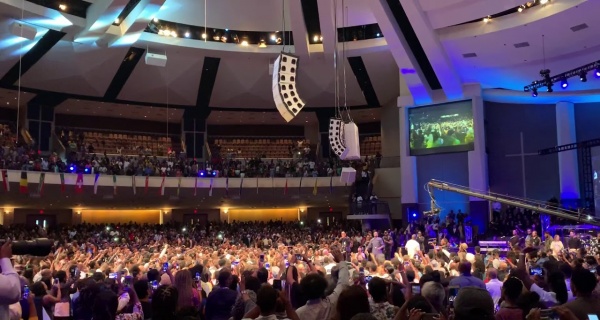 Rev. Jamal Harrison Bryant on Sunday announced a financial contribution to the HBCU’s general scholarship fund, according to a New Birth spokesman. The announcement came during the 9:30 a.m. church service. Bryant, senior pastor of New Birth in Stonecrest, said the funds will be used to make a financial contribution in honor of the Grammy Award-winning artist’s late mother Donda West, who previously served on the faculty at Morris Brown.

The size of the donation wasn’t immediately announced. Morris Brown College has struggled financially since losing its accreditation in 2002. Only a few dozen students attend the college, down from as many as 2,700 in the mid-1990s. Among Historically Black Colleges and Universities, it is the only one in Georgia founded by African Americans.

Kevin James, the college’s interim president, told New Birth’s congregation Sunday that Morris Brown was approved Friday as a higher learning institution by the Nonpublic Postsecondary Education Commission. He called it a “major step” toward accreditation. “When you lose your accreditation, you close,” James said during the Sunday service. “But for some reason, for the past 17 years, Morris Brown College has been able to survive. We will be the first historically black college in history ... since 1837 to actually come back and be fully accredited under these circumstances.”

West has been making such appearances on Sundays this year, including one in Dayton, Ohio, to help that community in the wake of a mass shooting and on Easter Sunday to bring a message of faith to those attending the music festival Coachella. The announcement from New Birth came a day after West brought his Sunday Service series to Howard University, a prestigious HBCU in Washington, D.C. It also came weeks after West defended his endorsement of President Donald Trump, whose support of HBCUs has been mixed.

“I went into prayer, and it dawned in me in prayer that Dr. Donda West, who was the mother of Kanye West, is a former professor at Morris Brown College,” New Birth’s Bryant said during Sunday’s service.

Donda West started her teaching career at Morris Brown College as an English instructor in the 1970s, and later became the department chair, according to an obituary.“I know what Dr. Donda West represented while at Morris Brown, and her mind for African American literature, was to empower, equip and engage students to be something radical that can change community and change society,” Bryant said.