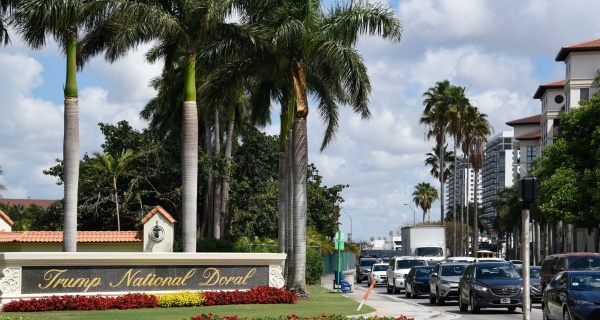 On Friday afternoon lawmakers introduced legislation to try to block the G-7 Summit from being held at President Donald Trump’s property in Doral.

The legislation’s goal would prohibit funding for the G-7 Summit, scheduled to be held at the Trump National Doral Miami. It also requires President Trump to submit to Congress any documents related to his decision to host the G-7 Summit at his property.

The announcement followed Thursday’s announcement that President Trump’s Doral resort will be the site of the next Group of Seven (G-7) summit. A companion bill is being introduced in the Senate by Senators Richard Blumenthal (D-CT) and Sheldon Whitehouse (D-RI).

“Mr. Trump is unashamed of his corruption,” said Rep. Frankel. “He is abusing the office of the Presidency and violating law by directing millions of dollars of American and foreign money to his family enterprises by holding an important meeting of world leaders at his Doral resort.”

“The prospect that Trump Administration would set aside the Constitution to line the President’s pockets by choosing to host the upcoming G-7 Conference to prop up one the President’s failing properties is enormously troubling. I thank Congresswoman Frankel for introducing this timely legislation. We need to get to the bottom of how the decision to host this National Security Special Event at one of the President’s resorts was made and whether President’s financial interests may have outweighed homeland security concerns,” said Homeland Security Chairman Thompson.

“I am deeply concerned about President Trump’s priorities. Rather than focus on the American people, he seems to be busy padding his wallet with taxpayer and foreign money. The federal government isn’t his personal piggy bank nor should it be the promotional arm of the Trump Organization. The announcement that the next G7 Summit will be held at his Doral Miami resort is a brazen example of the corruption and self-dealing that has characterized this administration. I believe this is a direct abuse of the president’s power and an emoluments clause violation. Beyond that, no public official should take any action suggesting an improper motive, and this has impropriety written all over it. The THUG Act would force the Administration to turn over documents on how a Trump property was chosen and prevent federal funds from being spent at the President’s Doral Miami resort to host the G7 Summit,” said Rep. Cohen.

“Donald Trump seems to have lost all shame in brazen self-enrichment— but Congress must stop him from using the Presidency to line his pockets. His contempt for the Constitution and American people seems boundless in profiting from his office through payments from foreign governments. Our Founding Fathers are rolling over in their graves. Congress must act to stop this plain craven abuse of power and corruption,” said Senator Blumenthal.

“Once again, Donald Trump is using the office of the presidency and our relationships with some of our closest allies to enrich himself. The founding fathers worried about perks flowing to a corrupt president, but they could have never dreamt of corruption this brazen,” said Senator Whitehouse.