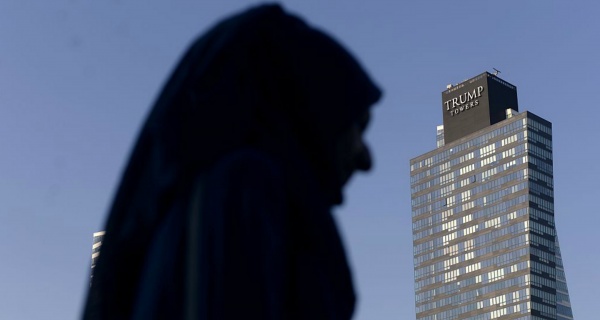 Two buildings in Turkey may have more potential to upend American national security than any of president-elect Donald Trump’s other foreign business dealings.

Trump’s business ties in the country center around two massive buildings mixing residential and office known as the Trump Towers Istanbul. Trump does not own the towers, but instead licenses his name to the developers, receiving between $1 million and $5 million since the beginning of 2015, financial disclosure documents show.

“I have a little conflict of interest ’cause I have a major, major building in Istanbul,” Trump said last year. “It’s a tremendously successful job. It’s called Trump Towers—two towers, instead of one, not the usual one, it’s two.”

Watchdogs that focus on ethics in government say that these business deals are especially sensitive due to the importance of Turkey to American interests—the county is a NATO member and a part of the coalition to fight ISIS.

“In terms of potential conflicts, Trump’s business in Turkey is certainly one of the biggest,” said Jordan Libowitz, spokesman for Citizens for Responsibility and Ethics in Government. “With all the focus on ISIS and the Middle East, Turkey is a country that gets a lot of attention in the war on terror. And that’s not something you want to hear at the same time as ‘conflict of interest.’”

Even before the president-elect has entered office, his projects in Turkey have been the subject of serious controversy, and illustrated how his business ties abroad could be affected by foreign actors.

During the presidential campaign, Trump’s proposal for a Muslim ban led Turkish President Recep Tayyip Erdogan to call in June for the businessman’s name to be removed from the towers—in essence, threatening the revenue source Trump gets from licensing his name there.

But Trump defended Erdogan a month later, saying the U.S. shouldn’t criticize the Turkish strongman for his crackdown after a failed coup—and there has been no mention of taking Trump’s name off the tower since.

“Erdogan has demonstrated again and again that he knows no limit in using business deals to reward or punish his counterparts,” said Aykan Erdemir, a former member of the Turkish Parliament who is now a senior fellow at the Foundation for the Defense of Democracies.

Trump’s licensing agreement in Turkey also puts the president-elect’s imprimatur on the towers, whether Trump happens to agree with a tenant or not. For example, Reza Zarrab, an Iranian businessman who allegedly helped Iranians dodge Western sanctions, ran his business out of Trump Towers in Istanbul. If Zarrab had run the operation during Trump’s time in office, would actors in the region presume it had the American president’s tacit blessing?

Since Election Day, the president-elect has done little to separate his business and his new powers. In a call with Erdogan one day after he was elected, Trump praised a Turkish business partner who had worked on Trump Towers Istanbul as a “close friend.” Not long after the election, Trump’s son Eric Trump spent three days hunting deer in southern Turkey, at the invitation of an unnamed Turkish businessman.

The conflicts of interest, especially in Turkey, have drawn the suspicion of Rep. Adam Schiff, the highest-ranking Democrat on the House Intelligence Committee.

“If you look at the history, in Turkey alone, of the Trump businesses, the Trump Towers there… The fact of the matter is we shouldn’t be having these questions… these are not questions the American people should be asking of a new president once he takes office,” Schiff said, at a breakfast roundtable with reporters. “There shouldn’t be any doubt that the president is acting in only one interest: the national interest.”

Schiff openly questioned whether Trump’s team had a financial relationship with the Turkish government, pointing to an op-ed written on Election Day by Michael Flynn, urging closer relations with Erdogan and suggesting that the United States no longer host Fethullah Gülen, a Muslim cleric living in Pennsylvania who Turkey has demanded extradited. Flynn, a retired Army lieutenant general who was pushed out as director of the Defense Intelligence Agency by President Obama, was a vocal Trump supporter during the campaign who was named days after the election as Trump’s White House national security adviser.

“Some of the things that the president-elect’s team has done and said are hard to explain in the absence of an economic motivation,” Schiff said. “It causes me profound questions about what’s really motivating this. Is it policy? It certainly can’t be the intelligence. Is it economic interest? Is it [a] consultant relationship with his firm?”

Trump’s business dealings in Turkey may also be more vulnerable to blackmail and foreign influence, principally due to the power held by Erdogan. For example, Trump’s business interests in Canada would be protected by a robust judiciary and the rule of law, and less subject to the whims of a powerful and illiberal head of state.

“Rule of law and checks and balances have eroded in Turkey. There is extreme centralization of power in the hands of President Erdogan,” Erdemir argued. “He can singlehandedly decide on the fate of investments, choosing to reward or punish businesses. Thus, President-elect Donald Trump’s business interests in Turkey would be solely at the mercy of Erdogan.”

Ultimately, the extent of Trump’s conflicts of interests are not clear because the president-elect has declined to release his tax returns, bucking decades of bipartisan political convention.

The most thorough information available to the public is in the financial disclosures Trump filled in 2015, which provided a few pieces of information about his Turkish projects but not the full picture watchdogs believe is necessary to provide accountability, especially given the country involved.

“We have locations, we have some general descriptions… but it’s hard to discern whether there’s profit-sharing, whether performance of some of these buildings, like the rent, then translates into money for the Trump organization,” said Project on Government Oversight spokesman Sean Moulton. “[With] our ongoing international relationship issues in the Middle East being of such high importance, it is particularly concerning.”