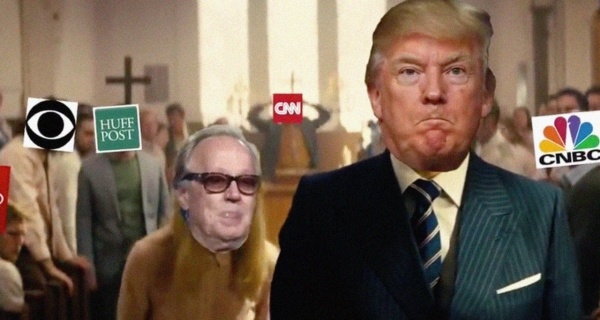 A purported parody video depicting Donald Trump violently attacking his opponents in politics and media has caused major concern, especially since it was shown at a pro-Trump conference recently.

In the clip, Trump’s face is superimposed on an actor’s body who is shown brutally shooting, stabbing and assaulting digitally manipulated images of news outlets like CNN, ABC, and HuffPost. One of the most disturbing parts comes when Trump is depicted violently attacking some of his most staunch political opponents.

In one instance, the Trump character repeatedly punches someone with Rep. Maxine Waters‘ face superimposed while another character with the word “JAIL” superimposed throws the Waters figure out of a window. In another instance, a Barack Obama character gets his neck snapped while being thrown against a wooden facade.

Another disturbing moment comes when a character with a Black Lives Matter logo superimposed gets grabbed by the neck and shot in the head. The mass shooting and violence in the video was set in a religious house of worship deemed the “Church of Fake News.” The video seems to have been edited from a church massacre scene from the 2014 dark comedy movie “Kingsman: The Secret Service.” You can watch the graphic video for yourself below.

The clip was screened at a three-day conference organized by a pro-Trump group called American Priority at the Trump National Doral Miami resort, according to The New York Times. Trump’s son Donald Trump Jr., his former spokeswomen Sarah Huckabee Sanders and Florida Gov. Ron DeSantis were scheduled to speak there.

The White House Press Secretary Stephanie Grisham claimed that Trump hadn’t seen the video, but “based upon everything he has heard, he strongly condemns” it.

After someone from the New York Times recorded video of the clip at the conference and covered it, one of the organizers for the event, Alex Phillips, said in a Sunday statement that it was shown as part of a “meme exhibit.” He denounced the clip and claimed his organization was investigating how it was shown at the event.

“Content was submitted by third parties and was not associated with or endorsed by the conference in any official capacity,” said Phillips. “American Priority rejects all political violence and aims to promote a healthy dialogue about the preservation of free speech. This matter is under review.”

The clip had already gained some traction when it was released last year by a YouTube channel called TheGeekzTeam, which is known to make videos of Trump attacking his political opponents. In one edited clip they superimposed Trump’s face on rapper Childish Gambino‘s face in his music video “This Is America.” Then, the depicted Trump goes on a similar killing spree against his media and political opponents.

According to Gizmodo, the edited “Kingsman” clip seems to have been a part of an online contest hosted by Meme World, a group of far-right video and image creators. Some members of the group have even made visits to the White House to meet Trump. The top prize for the Meme World contest consisted of hotel, airfare and food at the American Priority Conference along with access to a “VIP yacht party” and a $500 gift card to an undisclosed establishment.

Somehow, the mass shooting church video made it to the conference despite Meme World’s contests rules reading, “Submissions will be rejected if they contain RACISM, SEXISM, NUDITY, SEXUAL CONTENT, or EXPLICIT VIOLENCE AGAINST A SPECIFIC PERSON OR GROUP OF PERSONS.”

“MemeWorld has not and does NOT condone ANY violence committed by ANYONE, for ANY REASON. The Kingsman video is CLEARLY satirical and the violence depicted is metaphoric,” it said. “No reasonable person would believe that this video was a call to action, or an endorsement of violence towards the media.”

“This attack on the American Priority Conference and a MemeWorld contributor comes from the same New York Times that supported a play calling for President Trump’s staff to Assassinate him in the style of Julius Caesar. This attack is yet another example of the Mainstream Media’s hypocrisy. The Kingsman video was played on a small tv in an empty room for a few hours during a 3 day event that FEATURED AN ANTI POLITICAL VIOLENCE PANEL.”

Finally, Meme World said it “stands behind TheGeekzTeam and will REMAIN supportive of him in the future.”

That was in spite of (or because?) how violent or emboldening the videos might be.