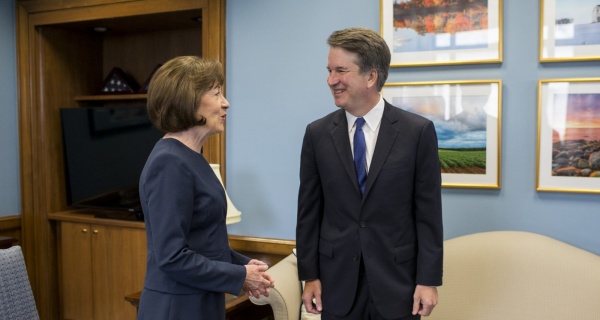 Sen. Susan Collins (R-Maine) sent a National Republican Senate Committee (NRSC) email to supporters this week, asking for donations based on her vote to help confirm Brett Kavanaugh to the Supreme Court of the United States.

The fundraising email was noticed by journalists Tuesday and Wednesday.

In the email — which has an “I will never forget this” subject line — Collins described her controversial Kavanaugh vote as one of the most important moments of her Senate career; she said that the Senate needs to keep a Republican majority to prevent “liberal extremists” from gaining ascendancy.

“This is urgent,” the email said. “Without a Republican Senate Majority, Justice Kavanaugh’s confirmation would’ve been derailed by liberal extremists. The Left only needs to flip 4 seats to take control of the Senate, and that would be the end of our common-sense agenda for America.”

The email then went on to single out Democratic presidential candidate Elizabeth Warren (D-Mass.), whose campaign pledged to devote resources toward unseating Collins in Maine.

“The far left will go to extremes to defeat Republicans,” the fundraiser continued. “Elizabeth Warren is even sending staffers and resources into Maine to try to unseat me. I have already seen millions spent against me, and these attacks will only get worse as Election Day nears.”

After making no promises as to how she would vote given the sexual assault allegations against Kavanaugh, plus questions about his abortion stance, Collins eventually decided to vote in favor of Kavanaugh’s confirmation. The vote was 50-48 and Kavanaugh now sits on the Supreme Court.

Collins had said that she would not vote for a nominee who demonstrated “hostility” to Roe v. Wade. Collins said that when she spoke with Kavanaugh they talked “at great length about precedent and the application of stare decisis.” According to Collins, Kavanaugh said he “agreed with what Justice Roberts said at his nomination hearing, in which he said that [Roe] was settled law.”

Leading Democrats said that asking Kavanaugh if Roe was settled law or asking him if it was wrongly decided are two different things.

Collins previously said she was sad that her support for Kavanaugh has cost her some votes because she “explained in great depth [her] decision-making.”