Russian Operative Stated 'We Made America Great' After Trump Victory 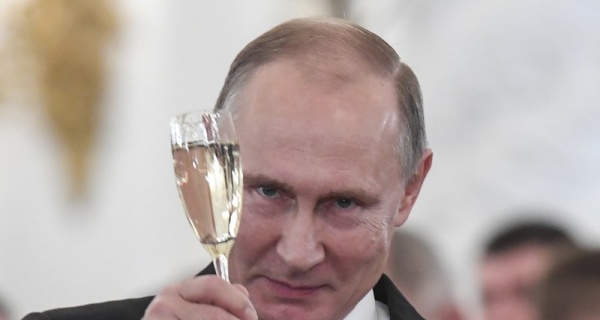 Kremlin-directed operatives opened champagne when Donald Trump won the presidency in 2016, according to a communication disclosed in a new Senate Intelligence Committee report outlining Russia’s sweeping social media efforts to help him win.

“We uncorked a tiny bottle of champagne ... took one gulp each and looked into each other’s eyes .... We uttered almost in unison: ‘We made America great,’” one operative at the St. Petersburg-based Internet Research Agency said in the message obtained by the Republican-led committee.

The long-pending report by the Intelligence panel concluded that Russia directed an aggressive social media campaign to hurt Democrat Hillary Clinton and help Trump in the 2016 presidential election and warns similar efforts to interfere in U.S. politics are still underway. It was a bipartisan endorsement of the finding made by U.S. intelligence agencies and often questioned by Trump.

The report, two years in the making, found that the Internet Research Agency “was overtly and almost invariably supportive of then-candidate Trump to the detriment of Secretary Clinton’s campaign.” As part of that effort, it targeted African-Americans through social media more than any other group.

“Russia is waging an information warfare campaign against the U.S. that didn’t start and didn’t end with the 2016 election,” he said. “Their goal is broader: to sow societal discord and erode public confidence in the machinery of government.”

Burr said Russia floods social media with false reports, conspiracy theories and trolls to breed distrust. “While Russia may have been the first to hone the modern disinformation tactics outlined in this report, other adversaries, including China, North Korea, and Iran, are following suit.”

Senator Mark Warner of Virginia, the committee’s top Democrat, warned of more interference to come in next year’s election. “There’s no doubt that bad actors will continue to try to weaponize the scale and reach of social media platforms to erode public confidence and foster chaos,” he said.

The committee had previously released portions of its analysis. The findings parallel the intelligence agencies’ conclusions as well as parts of the report by Special Counsel Robert Mueller.

Among the findings were efforts by the Kremlin-directed IRA to convert social media into real-world actions. Operatives posing as U.S. political activists also “sought help from the Trump campaign to procure campaign materials and to organize and promote rallies.”

Trump has at times cited Russian President Vladimir Putin’s assurances that Russia didn’t meddle in the 2016 election, and the president has pursued in recent months a fringe theory that Ukraine conspired with Democrats to trigger an FBI investigation of election meddling that he’s often called a “witch hunt.”

Among the report’s recommendations is for the Trump administration to “publicly reinforce the danger of attempted foreign interference in the 2020 election.” The committee suggested creating a task force to monitor other nations’ social media interference efforts and develop a framework for deterrence.

The committee also recommended that social media companies share more information about election interference with each other, as they have with extremist content, as well as providing it to government agencies and researchers. It also called for more publicity about the existence of influence operations.

The panel urged that lawmakers consider expanding to social media the existing transparency requirements for political advertising on TV or the radio. Facebook, Google and Twitter have all put together ad transparency databases, but differences between them persist and legislative vehicles, such as the “Honest Ads Act” that Warner supports, have stalled.

Senator Kamala Harris, a member of the Intelligence Committee who’s running for the Democratic presidential nomination, said in a statement that the Russian tactics were “designed to suppress the votes of black Americans in particular” and that social media companies must step up their efforts to fight disinformation. She said they need to “ensure their workforces are diverse enough to identify and understand the cultural nuances that foreign actors exploit to divide and harm Americans.”