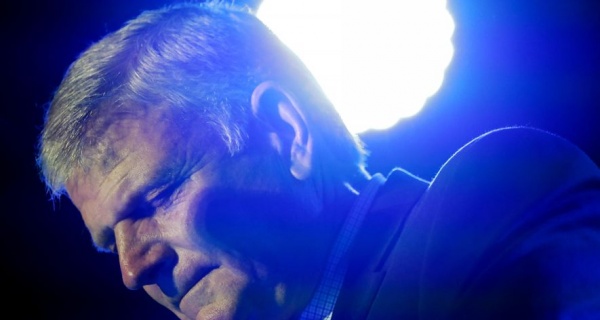 The Rev. Franklin Graham did not utter the word “impeachment” as he spoke to thousands of Christians here last week, the latest stop on a long-running tour he has dubbed “Decision America” — a title with political and religious undertones.
But evangelicals who turned out to see Graham didn’t necessarily need his warning that “our country is in trouble” in order to tap into their deep-rooted support for President Trump during an intensifying political crisis in Washington.

“I do feel like we are, as Christians, the first line of defense for the president,” Christina Jones, 44, said before Graham took the stage. Trump is “supporting our Christian principles and trying to do his best,” she added, even as “everybody’s against him.”

The impeachment furor is the latest test of Trump’s seemingly unbreakable bond with conservative evangelical Christians. Trump suggested this week that the peril of impeachment would only cement his ties to that voting bloc, which helped propel him into office, and supporters who have stood by him through accusations of sexual assault and infidelity see no reason to back away from a president they view as unfairly beleaguered.

Frances Lassiter, 65, dismissed Democrats’ pursuit of an impeachment case against Trump as “all a bunch of crap” designed to push him from office.

Asked about comments Trump circulated from an ally and Southern Baptist pastor who warned of a “Civil War-like fracture” if the president is ousted, Lassiter and others in the crowd at Graham’s tour shared concerns about political polarization putting further strain on the country.

Graham sounded a similar note in an interview aboard his tour bus. The 67-year-old evangelist and son of the late Rev. Billy Graham said the inquiry into Trump’s solicitation of help from Ukraine in providing political dirt on Democratic rival Joe Biden and his son Hunter — at a time when the U.S. was withholding nearly $400 million in aid from the war-torn country — was “a lot over nothing.”

Graham, for his part, encouraged Trump and others to keep looking, citing Hunter Biden’s past struggles with drug and alcohol abuse as a reason he is “suspect.”

According to the Billy Graham Evangelistic Assn., 13,800 people attended Graham’s Wednesday event in Greenville, seat of a county that Trump won in 2016. Greenville also hosted a Trump rally in July where the audience broke into a chant denouncing a freshman congresswoman that echoed a racist remark the president had directed at her and other Democratic lawmakers.

Graham’s preaching tour featured another touch, one more reminiscent of a political rally: counter-programming from evangelicals on the left. An hour outside of Greenville, a group of progressive Christians led by the Rev. William Barber II and his Poor People’s Campaign held a “Red Letter Revival” to offer an alternate vision of policymaking aligned with biblical values.

That revival aims to redefine public understanding of issues of faith, encompassing an inclusive immigration agenda as well as more focus on helping the poor and the environment, explained Jonathan Wilson-Hartgrove, a liberal evangelical preacher helping to organize it.

Wilson-Hartgrove described Graham’s tour as a “coordinated effort to intertwine” religion and conservative politics. While he had little hope that supportive evangelicals would abandon the president for “personally offensive” actions — Trump used profanity to denounce Democrats this week — Wilson-Hartgrove cast impeachment as “a moral question.”

“Does a president of any party have a sort of unquestioned right to, in this case, break [Federal Election Commission] rules and to break the law in order to win an election?” Wilson-Hartgrove asked in an interview. “It’s a question of right and wrong, which people of faith should have concerns about.”

In August, a Pew Research survey found 77% of white evangelical Protestants approving of Trump’s performance. Those who report attending church weekly were more likely to approve than those who attend less often, 81% versus 73%.