Unhinged: Kanye Doubles Down On His Support Of Trump 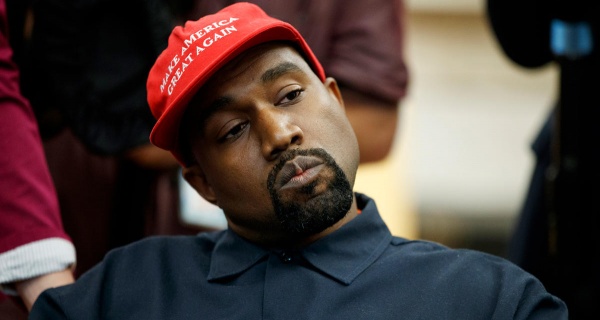 Kanye West’s latest Sunday Service performance took a political turn, with the rapper pausing to defend his support of President Trump to fans in Utah.

As the Deseret News reports, West emerged in Salt Lake City on Oct. 5 to host a Saturday edition of his popular church-inspired gatherins, which coincided with Mormon stronghold’s 189th Semiannual General Conference of The Church of Jesus Christ of Latter-day Saints. Though buzz over his forthcoming, oft-delayed new album, Jesus is King, has reached a fever pitch, the 42-year-old star performed an older hit for the thousands of attendees present: “Jesus Walks.”

West appeared to have things on his mind other than music, according to reports. At one point he warned fans about social media, telling them to “not read comments on the internet.”

“These people don’t know you like that,” he said. “Social media is designed to make you think slower ... They want to slow you down and control you.”

He also turned to politics. It’s been just over one year since West made headlines by delivering an impassioned speech in support of Trump during the Sept. 29, 2018 Season 44 premiere of Saturday Night Live. Just two weeks later, on Oct. 11, he visited Trump at the White House, where he likened his red MAGA cap to a “Superman cape.” Both moments — along with his statements earlier that year calling slavery was a “choice” — resulted in a fair amount of ridicule and scorn from some fans.

West, however, remains defiant, according to footage from his Utah gig.

After hailing the Republican Party and Abraham Lincoln for freeing slaves, West fired back at critics who suggested pro-Trump views were at odds with his status as a black man.

“They try to tell me because of my color who I'm supposed to pick as the president,” he told the crowd. “‘You're black, so you can't like Trump.’ I ain't never made a decision only based off my color. That's a form of slavery, mental slavery.”

He also reportedly hit out at “mind controllers” in the media, then went on to speak out against the incarceration of African-Americans. He pushed for criminal justice reform, an issue wife Kim Kardashian is actively pursuing in collaboration with the Trump administration.

Though West has stayed relatively mum on politics this year, his comments about backing Trump as a black man echo his most recent tweet, dating all the way back to Jan. 1.