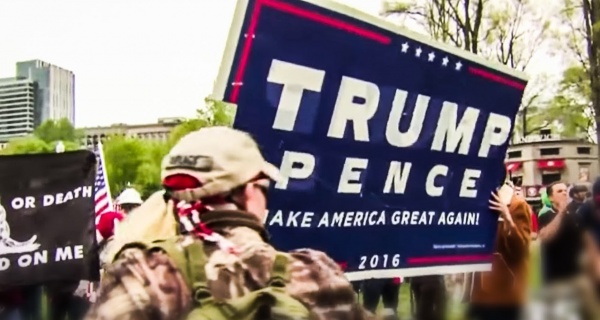 Over the weekend, the president sent a tweet that seemed to warn of civil war if he were to be impeached and removed from office:

Donald J. Trump
@realDonaldTrump
Replying to @realDonaldTrump
....If the Democrats are successful in removing the President from office (which they will never be), it will cause a Civil War like fracture in this Nation from which our Country will never heal.” Pastor Robert Jeffress, @FoxNews

Although the president was quoting Pastor Robert Jeffress’s comments on Fox News, he was adopting them as his own.

It might seem tempting to dismiss this language as of a piece with President Trump’s typical Twitter rhetoric. But it is worth paying particular attention to this tweet—because among the people who read it were militia groups enthusiastic about exactly what Trump portended. And while no violence has yet resulted from the president’s tweet, it would be foolish to underestimate the power of Trump’s comments to call rogue militias to action, particularly if there is an impeachment and he continues to use this rhetoric to fan the flames. In the days after his civil war tweet, he went on to use similarly incendiary language, referring to impeachment proceedings as a “COUP.”

Before this tweet, the Oath Keepers account tweeted that, under the U.S. Constitution, “the militia (that’s us) can be called forth ‘to execute the Laws of the Union, suppress Insurrections and repel Invasions.’ ... “All he has to do is call us up. We WILL answer the call.” Other Oath Keeper tweets also hint at violence: One states that “their favorite rifle is the AR 15.”

According to the Oath Keepers’s webpage, the organization is “a non-partisan association of current and formerly serving military, police, and first responders, who pledge to fulfill the oath all military and police take to ‘defend the Constitution against all enemies, foreign and domestic,’” while declaring that they “will not obey unconstitutional orders.” The Anti-Defamation League, by contrast, describes the group as “an anti-government right-wing fringe organization” whose members have appeared “as self-appointed armed guards” at various places around the country, in defiance of what they deem to be unconstitutional government action. Last month, the group sought “security volunteers” from their membership and “other capable patriots” to escort Trump supporters attending a New Mexico rally “to protect them from potential leftist violence.” And last year, the Oath Keepers announced its “Spartan Training Group program,” with the goal of “form[ing] training groups in as many states as possible” to create “a pool of trained, organized volunteers who will be able to serve as the local militia under the command of a patriotic governor loyal to the Constitution, or if called upon by President Trump to serve the nation” (emphasis in original).

The Oath Keepers are far from the only militia group that vocally supports deploying potential force in aid of the president. In November 2018, after Trump pledged to send up to 15,000 U.S. troops to the border to deal with the approaching caravan of Central American migrants, the militia group known as “The Minuteman Project” published an “URGENT CALL FOR TEXAS BORDER OBSERVATION DUTY” to cover the 2,000-mile border from San Diego to Brownsville, Texas. According to U.S. Army documents obtained by Newsweek at the time, the military expressed its concern internally about the presence of unauthorized militias along the border, warning that protests occurring at points of entry historically had been peaceful, “unless extreme right or left groups attend.” The Minuteman Project’s co-founder, Jim Gilchrist, cautioned potential volunteers that their adversaries were “US-based PROPAGANDA organizations like the American Civil Liberties Union, the Southern Poverty Law Center, People without Borders” and many more groups like them. He further warned members to “use extreme caution when confronted by mainstream media” because “they are not your friends.”

Earlier this year, after Trump’s reelection campaign repeatedly ran ads quoting Trump’s references to an “invasion” on the southern border, another group—the United Constitutional Patriots—set up camp at the New Mexico/Mexico border. Without any legal authorization, this group assumed the duty of U.S. Customs and Border Protection to stop and detain migrants, all while heavily armed and dressed in military fatigues. In March and April 2019, a spokesperson for the group, Jim Benvie, regularly posted livestream videos on Facebook showing militia members chasing and capturing migrants while armed with assault rifles, and detaining them until they could be turned over to U.S. officials. In other posts, the United Constitutional Patriots described themselves as combatants in a “war” raging along the border due to migrants’ “invasion” of the country and actively sought to recruit people with military or law enforcement experience to join them. One such recruit, upon observing migrants while on “patrol” at the border, reportedly grabbed his AR-15 and asked his fellow militia member, “Why are we just apprehending them and not lining them up and shooting them?” In April, after the group’s “national commander” was arrested on unrelated charges and the Union Pacific Railroad ordered the group off of its property, significant media attention exposed the militia’s activities and it reconstituted itself as the Guardian Patriots, decamped to private land with the owners’ consent, and closed its public Facebook account.

Both of these armed militias took action at least in part in response to Trump’s rhetoric about the need to secure the southern border. Now that the president has invoked the idea of civil war, there is a risk that armed groups will take heed of this language too, whenever the president suggests that it is time.

Federal criminal law prohibits “rebellion or insurrection against the authority of the United States or the laws thereof,” including incitement or assistance to such rebellion or insurrection. It also prohibits conspiring to overthrow the U.S. government, levy war against it or oppose its authority by force. Based on the organization’s declared mission, there’s little doubt that the Oath Keepers would view any impeachment action by congress as “unconstitutional” and therefore not to be obeyed. Although the group’s current tweets come close to calling for rebellion or insurrection should that happen, there’s been no indication that the U.S. Department of Justice is investigating. Are the militias drawing up plans for possible civil war, for example? Are they training? Are they stockpiling weapons? These are things that law enforcement should be investigating, whether under federal law or state law.

Although it is widely believed that the Second Amendment protects the right to form private militias, it does no such thing. The Supreme Court made this clear in its 2008 decision in District of Columbia v. Heller, explicitly reaffirming its own 1886 holding that “the Second Amendment ... does not prevent the prohibition of private paramilitary organizations.” Indeed, they are prohibited by state constitutional provisions or statutes in all 50 states.

The constitutions of 48 states include provisions that require the military to be at all times subordinate to the civil authority. That means that private, unregulated and unauthorized militias—operating wholly outside of the civilian governmental authority and public accountability—are prohibited by state law. There is good reason for this. As prominent historian and scholar A.E. Dick Howard wrote in 1974 in “Commentaries on the Constitution of Virginia,” the Virginia constitution’s ban on private militias “ensures the right of all citizens ... to live free from the fear of an alien soldiery commanded by men who are not responsible to law and the political process.”

Notably, Virginia was the first state to adopt its own constitution, known then as a Declaration of Rights, in June 1776. According to the operative language in Virginia’s constitution, illustrative of the language used in 47 other state constitutions, “[I]n all cases the military should be under strict subordination to, and governed by, the civil power.” Last year, in a successful lawsuit against the private militias that usurped legitimate law enforcement authority during the 2017 Unite the Right rally in Charlottesville, Virginia, a state judge ruled that, based on this “strict subordination” clause in Virginia’s constitution, “[t]here appears to be no place or authority for private armies or militia apart from the civil authorities and not subject to and regulated by the federal, state, or local authorities.” The case resulted in court orders prohibiting the defendant militias from returning to Charlottesville as part of coordinated, armed groups during rallies, protests, demonstrations and marches.

Other state law criminal provisions also prohibit various types of militia activity. Twenty-eight states prohibit groups of people from associating together as a military unit or parading or drilling together in public with firearms. (It was one of these statutes that the U.S. Supreme Court upheld in 1886 against a Second Amendment challenge in Presser v. Illinois.) Similarly, 25 states prohibit assembling together to teach, demonstrate, train or practice with firearms, explosives or “techniques” capable of causing injury or death, knowing and intending to further a civil disorder. And another state criminal statute, found in some variation in 12 states (and in the U.S. Code), prohibits the false assumption of the duties of a law enforcement or peace officer or the unauthorized wearing of military uniforms or close imitations thereof. The United Constitutional Patriots' spokesperson, Jim Benvie, is currently charged in federal court with violations of the federal statute based on his false assumption of the duties of the U.S. Customs and Border Patrol. And this summer, the Virginia attorney general issued an opinion that heavily armed militias, dressed in fatigues and other military accessories, acting in a coordinated fashion and patrolling a line of citizens waiting to engage with their elected legislators before a special session on gun safety legislation, violate Virginia’s prohibition on the false assumption of law enforcement functions.

The Oath Keepers and other militia organizations are in violation of some of these laws right now. Their existence as private paramilitary units in states with “strict subordination” clauses is prohibited, as it is in states with statutes that prohibit associating together as a military unit or company. Training, instructing or practicing in paramilitary techniques for use in a “civil war” or other uprising is also currently banned in many states. And to the extent the armed militias are showing up in public places asserting authority they don’t have, they are violating state and federal laws criminalizing the false assumption of law enforcement duties.

Some observers may say that the tweets of both the president and the Oath Keepers are simply hyperbole. But the militia movement has shown that it will take action based on the president’s statements. His “civil war” comments were phrased conditionally—dependent on “the Democrats” attempting to remove him from office. State officials and law enforcement, however, do not have to wait for that condition to be fulfilled—or for the president to post new tweets that militias may interpret as calling them to arms—to tackle the potential threat posed by militias. Governors may issue cease and desist orders based on their state constitutions, law enforcement may initiate investigations based on federal and state criminal statutes, and the public may report instances of current law-breaking by militia members. Authorities would not sit idly by while foreign forces prepare for potential violence against other Americans, and they should not sit idly by while rogue private armies do the same.