Unhinged: Nikki Haley Says 'Every American Should Be Proud Of Trump' 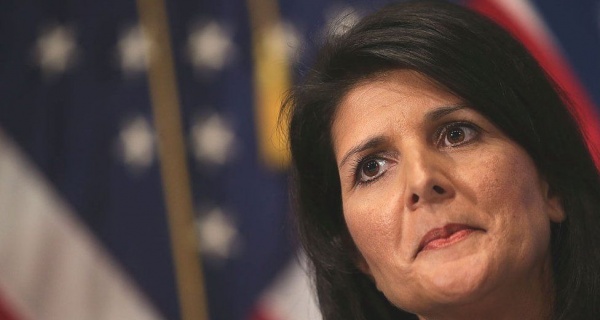 Former U.N. Ambassador Nikki Haley is throwing her support behind President Trump's reelection campaign ahead of a fundraiser for the president in New York this weekend, saying that "every American should be proud" of him.

"I'm happy to partner with the RNC supporting President Trump's reelection, and I look forward to doing more for his campaign in the next year," Haley told Fox News Friday.

“If you look around the world, President Trump has a record every American should be proud of,” she said. “In the Middle East, the ISIS caliphate has been destroyed, and we’ve stopped handing billions in cash to Iran that it used to fund terrorism. The North Korean regime is no longer testing long-range missiles. America is once again treating the Cuban dictatorship like the pariah it is, and Maduro's days are numbered in Venezuela.”

She added, "America is strong again, and it’s because of President Trump’s decisions."

Haley resigned from her Trump administration post last year, hinting at the time that she would support her former boss for reelection and downplaying speculation that she may issue a primary challenge against him. She has also denied "false rumors" that she may replace Vice President Mike Pence on the president's 2020 ticket.

While Haley remained complimentary of Trump on Friday, the pair haven't always seen eye-to-eye. In August, for example, she scolded the president for his response to an attempted break-in at Maryland Democratic Rep. Elijah Cummings' Baltimore home.