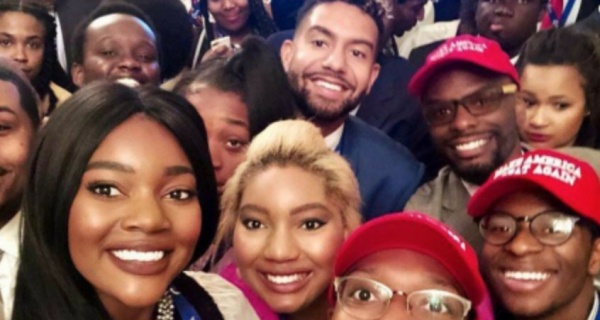 Another year, another function organized for young Black conservatives with Candace Owens as their leader. From Thursday to Saturday, Turning Point USA will host their annual Black Leadership Summit in Washington D.C. and it’s sure to be another moment in sunken place history.

Last year, the event hosted such barren all-stars like Ben Carson, who continues to push discriminatory housing, and Stacey Dash, who’s currently in the middle of a messy domestic dispute. This year, the Black conservatism continues with another lineup of “influencers” who push paper-thin politics. Just for a little teaser, the lineup includes people like:

Rob Smith – a Republican Iraq war veteran who says it was harder to come out as conservative than it was to come out as gay. He also believes the lack of Black fathers causes the downfall of the Black community.

Deneen Borelli – conservative author and media personality who wrote the book Blacklash: How Obama and the Left Are Driving Americans to the Government Plantation. She was also the Outreach Director for the Tea Party-associated group FreedomWorks.

Larry Elder – a radio host and media personality who also believes that the lack of fathers are the downfall of the Black community…not white racism.

Pastor Mark Burns – an evangelical pastor and Trump supporter who falsified his biography.

And of course, habitual liar and money chaser, Owens, will also be giving a talk at the summit.

If all of this doesn’t get you excited about all the ridiculousness that’s going down in D.C. this weekend, maybe an upbeat promotional video from Brandon Tatum, a.k.a. B. Tatum, will get you hype. In the clip, he shouts out all the speakers for the summit and he creepily reveals that attendees will be “taking a very special field trip to an undisclosed location.”

If you’re not excited, the speakers are certainly giddy.

Smith wrote on Instagram, “The rumors are true: @turningpointusa Black Leadership Summit 2019 IS GOING TO THE WHITE HOUSE THIS WEEK! And there are STILL SPOTS AVAILABLE!”

It’s about to be a mess.