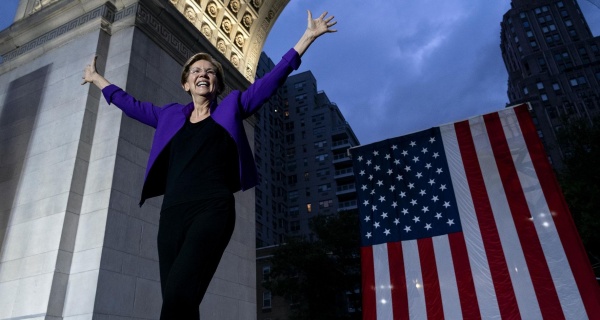 It’s been over a year since I decided to stop supporting President Trump and join the Democratic Party. I have also decided to support Elizabeth Warren in the Democratic primaries. To this day, I am still asked why I made the transition — and I feel that I need to explain why.

I was a conservative activist and writer for a couple of years prior to the 2016 election. I decided to do this because I felt threatened by Democrats, and I believed that they wanted to take our rights away — rights like freedom of religion, and speech. I believed Islam was a religion of terror. I believed Democrats wanted to destroy the sanctity of marriage. I had a myopic view of the second amendment, without seeing its full context. I condemned socialism and abortion. I wanted a wall to stop immigrants from “invading” America.

I was originally a Ted Cruz supporter, but when the conservative media I consumed started teaching me to hate Hillary Clinton, I decided to vote for Donald Trump. At the time, I didn’t realize who Trump really was.

Trump wanted the same things I wanted, so I thought he was an easy choice for President of the United States. I really believed Trump was a patriotic, successful businessman, who cared about all Americans, and that sold me on voting for him. I was aware he wasn’t a saint, but I felt no one is perfect and anyway, conservative news networks kept calling Hillary a criminal.

So how did I end up changing my mind?

After a couple of years of defending Trump and calling media that portrayed him in a bad light “fake news” — which was a thing before Trump — I had a conversation that changed my approach on social media. I realized I had always been aggressive and mean. I wanted to force my views on people. There was never a debate — I used insults and ad hominem attacks.

These tactics didn’t get me anywhere. Comedian Sarah Silverman actually reached out to me after I attacked her comedy online. Sarah used kindness, which was not expected, and she got my attention. I asked why she didn’t like Trump and she told me why without any arguments. I felt that if this progressive, very liberal celebrity is willing to talk to me about Trump, maybe I can find out why liberals believe in the things they do.

As I began conversing with Silverman, other people began reaching out to me. I started learning more about Democratic values and people. In many ways, it was shocking.

As this was going on, Trump supporters who knew me saw this and called me out, saying I was a traitor, a sellout, a Dem plant, a fraud — which surprised me because I thought they were friends. People I had once connected with ended up blocking me.

The insults continue to this day, but when it happened during that initial learning period, it snapped me out of my MAGA trance. I saw how Trump thrives on this behavior, and that’s when I decided to no longer be part of MAGA.

I still supported Trump because of who I thought he was — but then the Helsinki meeting with Putin came. I saw how he, the President of the United States, made himself vulnerable to Putin and Russia, agreeing to closed-door meetings and being recorded by our adversaries. What kind of president would do such a thing? When I saw someone tweeted a clip of the debate between Hillary Clinton and Trump where she called Trump a puppet of Putin, I was stunned. I now believe she was right. This is not the guy who I voted for, and yet it is.

That was the moment when I decided I was no longer a Trump supporter. I went back over years of his corruption, lies, and draft-dodging. My whole world was turned upside-down.

I have been on two separate journeys: one wherein I ended my support of Trump, and another, separate journey wherein I became a Democrat. No, Sarah Silverman did not get me to stop backing Trump or become a Democrat. What she did was inspire me to talk to other people who had different views to mine. She accepted me for being a Trump supporter and that’s what brought down my wall of hate and closed mind.

I maintained a myopic view on the right to bear arms, and believed that Democrats want to take all of your guns — but I’ve learned from the conversations I’ve had since that that’s far from true. I learned that while the second amendment states that we have the right to bear arms, it should be within the confines of a well-regulated militia. The history of an AR-15 makes it clear that it was meant to be a weapon of war. There’s no reason why a civilian should own weapons that are only meant for combat.

I also learned that seeking asylum is a human right and that immigrants who are fleeing for their lives deserve it. Yet, the Trump administration is inhumanely violating this right by separating families at the border.

Free speech applies to all Americans, even if we do not agree with what they’re saying or protesting for. I’ve learned what Kaepernick was kneeling for, and it was to bring awareness to police brutality against the black community. You will never hear about that in conservative media.

I learned the truth about President Obama, Hillary Clinton and other top Democrats. I have learned of all the good they have done for our country. They are not twisted, evil people who wanted to destroy America from the inside. All they wanted to do was to help move our country forward.

Barack Obama constantly talked about empathy, the need for us to put ourselves in other people’s shoes. My journey is ongoing. I’ve learned what Islam is really about and all the good Muslims have done for America. They have served our country, and they are not antisemites. Islam is similar to Judaism and Christianity, which teaches about a loving God as well as the importance of loving our fellow man.

As the 2020 election draws near, I have decided to vote for Senator Elizabeth Warren. I appreciate her empathy for people of color and women, because their voices are often ignored. I support her because she has a similar background as I did, being that she was originally conservative and she’s now a liberal. I feel she is the strongest leader in the Democratic Party and can take on Trump.

Do I agree with all of her policies? Absolutely not. For example, I don’t agree with Medicare-for-All. I believe people should have the right to choose their provider and to choose if they want to be insured or not. But even with my disagreements, I believe she is the most put-together candidate to move our country forward.