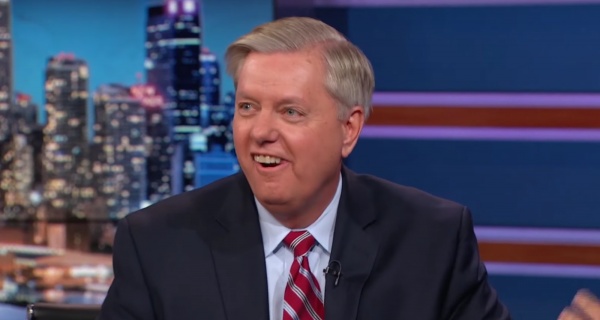 In case you were wondering if the Republicans in congress cared about The President of the United States manipulating foreign leaders to slander political opponents for his own gain and then attempting to cover it up, worry not. The GOP has made it clear that there’s nothing that Trump could do to make them stand up against his corruption and continued attempts to find a new bottom to American shame, but the latest statement is a really amazing exercise in sheer hypocrisy.

Lindsey Graham, human equivalent of day-old soup and Senator from South Carolina, had the following dumb thing to say on twitter earlier this morning:

Lindsey Graham
?
@LindseyGrahamSC
In America you can’t even get a parking ticket based on hearsay testimony.

But you can impeach a president?

I certainly hope not.

This drew an immediate and deafening response that got “Linda Tripp” trending on twitter.

Garrett M. Graff
?
@vermontgmg
Beyond the fact that Graham and the GOP had little trouble impeaching Clinton on Linda Tripp’s second-hand info, the allegations now are in the document released by the White House ITSELF. Trump *himself* told us he did this! He said he ordered the Code Red!

Let’s break it down. Way back in the day, Bill Clinton was the first sitting president in more than a century to face a successful vote to impeach in the House. The Clinton Impeachment is a hard thing to understand, I know. But here’s the bare bones: Clinton was impeached for perjury and obstruction of justice for allegedly lying under oath in a suit against him for sexual harassment. In that suit, brought by Paula Jones, Clinton was asked under oath if he’d had an affair with white house intern Monica Lewinsky – he denied that, in a roundabout way. Jones’s lawyers and the forces investigating Clinton, knew about the Lewinsky affair because Linda Tripp informed them about it.

So, Clinton was not impeached for having an affair, he was impeached for lying about it under oath. That’s all. I know perjury is serious, but when you compare that to, oh, I don’t know, treasonously using the oval office to influence foreign powers for personal gain, it kind of seem like small potatoes. Even so, the Republicans in the 90s hated Clinton so much that his lie was enough to impeach. And we knew about that lie because of Linda Tripp’s disclosures. And who was leading that charge? Well, none other than Lindsey Graham.

“Impeachment is about cleansing the office,” Graham claimed, when it came to trying to oust a man he didn’t agree with politically. But now, when a man who has said horrible things about him is hiding secret calls with foreign leaders and using his power to (again) manipulate our very democracy, the accusations are “hearsay.”

And hearsay isn’t even the correct term! Hearsay is a legal term of art meaning statements from one witness of something someone else said, offered for the truth of the matter the asserted. It would be something like a witness saying “Lindsey told me he helped steal the soup.” It just isn’t trustworthy. But even then there are massive amounts of exceptions and such. I guess Lindsey forgot that class from Law School. But it’s a thing at trial, it’s nothing like a real-life crime like parking in the wrong place, or hiding evidence of committing treason. But none of that matters because impeachment is not a judicial trial!

And it also super doesn’t matter because, while it was the whistleblower that brought attention the calls and action by Trump that are the focus of the impeachment inquiry, it is the actual calls that we have records of – and the other stuff the administration has hidden – that are the focus of the inquiry. Also, it should be noted, that Linda Tripp’s telling authorities she knew her friend had an affair with the president stretches the definition of hearsay too.

But that’s not what matters here. What matters is Graham’s hypocrisy on multiple levels, from being willing to impeach Clinton over a single lie, to trying to keep a man he hates in power because…I guess it’s good for Lindsey now? It wasn’t back in the day when he actually tweeted something right:

Lindsey Graham
?
@LindseyGrahamSC
If we nominate Trump, we will get destroyed.......and we will deserve it.

We all know what’s really going on. Lindsey Graham never believed that Bill Clinton should have been removed for lying under oath. That was just an excuse. Like all the republicans back in the day, he simply hated Clinton. And now, with massive evidence that Trump is the most corrupt president of all time, Graham’s crocodile tears for integrity are nowhere to be seen because Trump’s power and presidency benefit him. The office certainly does need to be cleansed now, but the senate and republican party also need to be cleansed of men who put their self-interest over the truth and the principles of the country and Constitution they swore to protect.