A Cesspool Of Corruption And Incompetence Finally Caught Up To Trump 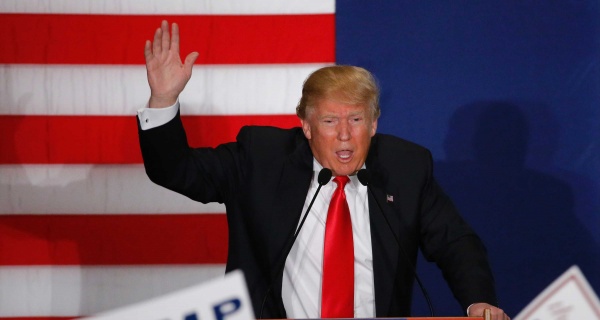 The current state of the US Presidency can be summed up in a single Donald Trump tweet. At 7:02 am on Friday he wrote:

“To show you how dishonest the LameStream Media is, I used the word Liddle’, not Liddle, in discribing Corrupt Congressman Liddle’ Adam Schiff. Low ratings @CNNpurposely took the hyphen out and said I spelled the word little wrong. A small but never ending situation with CNN!”

Trump lambasted CNN for intentionally removing a “hyphen” at the end of the word Liddle. A hyphen at the end the word Liddle would look like this, Liddle-. Had duplicitous CNN editors committed such an offense they likely would have been doing the Stable Genius a favor. Trump obviously thinks that an apostrophe, Liddle’, is a hyphen.

Why did CNN do this? Why did they remove the hyphen, that’s actually an apostrophe, from the President’s verbiage? Obviously, they’re out to get him. Malevolent minions at CNN want you to think the President of the United States can’t spell. They want him to look bad. Defending himself via Twitter the Grammarian in Chief also reminded us that the word ‘describing’ is correctly spelled “discribing”.

This meaningless tweet-mess is indicative of the meaningful whistleblower mess that Trump has recently gotten himself (and likely quite a few others) into. The Ukraine scandal is a fathomless hole of crooked idiocy that a frenzied President may not be able to climb out of.

Of course, Donald Trump and his scatter minded attorney Rudy Guiliani’s efforts to pressure the Ukranian government to investigate a political rival, Joe Biden are troubling. Of course it’s another obnoxious abuse of power and of course, it’s a high crime worthy of immediate impeachment.

Of course, it’s been transparently obvious since the whistleblower story first broke that Trump, indeed, “did it” and that during a semi transcribed conversation with President Volodymyr Zelensky Trump implicitly made Zelensky an offer he couldn’t, completely refuse.

It’s also important to keep in mind that these are not the well thought out, strategic moves of an unethical stable genius, a dangerous dictator-in-self-training, a force to be reckoned with who intentionally twists, subverts and subjugates the legal system to push forward a well defined ideological platform or a cautiously developed, counter-political agenda.

At best, Trump and Guliani’s month’s long, tag-team endeavor to further corrupt Ukranian officials are dimwitted bumbles that might just sting Joe Biden. A small handful of a handful of undecided, independent 2020 voters might care. A larger, right-wing portion of the electorate, who would prefer Russian annexation of our eastern seaboard to voting for a Democrat will care a lot.

Nonetheless, with Democratic primary candidate Elizabeth Warren surging nationally and ever so slightly upping Biden in statistically, dead-heated Iowa Caucus polling, a Trump manufactured Biden weakness might be completely irrelevant in the months to come, even if it gains immediate, albeit nonsensical traction.

It’s also transparently obvious that the US President’s sycophantic, wannabe authoritarian enablers at the Department of Justice and a clearly conflicted acting Director of National Intelligence obfuscated a whistleblower law they were entrusted to enforce. Of course, they’re all engaged in an obvious, if not almost adolescent coverup. And it’s certainly no surprise that a frantic, madcap collection of White House staffers decided to cyber-bury a full transcript of their boss’ spontaneous shakedown of a foreign leader.

As Trump supporters babble on the Beltway declaring the president’s innocence and politically impotent, moderate GOP Senators cower away in “no comment” seclusion zones or “let’s wait for all the facts” panic rooms, and while Nancy Pelosi and the Democrats spinout deposition and document subpoenas laying the groundwork to draft Articles of Impeachment, it’s important to remember that this whole crazy episode was inspired by the predictable rantings of an impulsive know nothing. This modern presidency is a full-blown mess, a fluid national crisis, no more well thought out than an impetuous, 7:00 am tweet.

The President of the United States has no idea what he’s doing from one day to the next. This isn’t meant to be an insult. Three years into his Presidency, it’s simply an obvious conclusion. Acting in cahoots with Rudy Guliani, a once semi-honorable man, universally lauded as America’s mayor (who lately seems to have nothing better to do than scream incoherently on cable news shows and tweet about his soon-to-be recognized heroics) further cements the conclusion that the President and those who enable him are laughably ridiculous.

Acknowledging the unintended comedy of this blockheaded pandemonium doesn’t mean the lawlessness shouldn’t be stopped. It doesn’t mean that Democrats shouldn’t aggressively seek the removal of a crooked chief executive. It doesn’t mean that Donald Trump and Bill Barr’s shenanigans don’t threaten the foundational principles of the rule of law. It doesn’t mean that this President hasn’t destroyed countless lives with reckless rhetoric, with cruel and uninformed policy initiatives and with his desperate, neurotic efforts to sell himself as the greatest deal maker inside and outside of the nation’s capital.

It does mean that we have to consider an uncomfortable reality. We’ve all been played by a functional moron who misspells words while tweet raging about being accused of misspelling words, an off-the-rails, empowered narcissist who truly cares more about a missing hyphen (that’s actually a missing apostrophe) than he does the enormous responsibilities of his office.

Two years of Republican control of the government followed by months of effective or ineffective inaction by House Democrats has left us all with a feeling of helplessness. We started to believe that Trump really was a Teflon Don. He took on the persona of an untouchable sleazeball, a protected godfather willfully emboldened to commit transparent acts of lawlessness in plain sight. He dragged the West Wing and the Halls of Congress into perpetual states of chaos. He fully corrupted leadership at the Department of Justice, GOP members of the House and the Senate, segments of the US Customs and Border Patrol, and much of the US Immigration and Customs Enforcement agency. He perverted the Office of the Presidency and bastardized it’s Cabinet. Free of accountability, he convinced us that he really could shoot someone on Fifth Avenue.

Perhaps that perception of ironclad, shielded invincibility is finally shifting. Perhaps the uptick in public polling for the impeachment process, Congressional Democrats successfully interviewing a witness on the Hill, and a nervous President tweet-panicking about punctuation marks suggests we won’t subjugate the pillars of our democracy to the debilitated whims of an incurable reality show star.

The United States is a young, hard-earned republic and a beacon of freedom. Countless soldiers on the battlefield shed blood to protect an evolving system designed to value the freedom of each and every citizen.

Juxtapose that noble effort against those of the current president. A shell of a young man who actually avoided military service with the bone spur “get out of war” card cliche is now the apricot-tanned, old man stealing money from the US military to build a vanity wall, all the while sending soldiers abroad to protect his personal assets in Saudi Arabia. He’s also the character who’s going to decide if we start an unnecessary, unwinnable war with Iran. And now, he’s the truthless bumpkin who withheld military aid from the Ukrainians while putt-putting a corrupt clown car through the streets of Kyiv.

For this reason and so many others, I reject the idea that Donald J. Trump has the smarts, the influence or even the dumb, falling up luck to destroy a nation that so many worked so hard to build.

This president will be either be removed from office by Congress or by a majority of common sense voters in 2020. Months ago Nancy Pelosi predicted that he will self-impeach. The only way a Senate of Republican cowards convict this guilty president is if he behaves so egregiously during the impeachment process that have no choice. That’s not improbable.

If removed by an election, Trump won’t concede and will almost certainly capitulate to a spoiled, childlike compulsion that always longs for placation. Resisting the will of the people, he’ll make every effort to cater to the needs of his insatiable ego. The country will then suffer another asinine, unconstitutional process of transparent stupidity.

The system will hold, as it’s done thus far and will prove itself stronger than the ramblings of a weak-minded narcissist or the desperate, protective efforts of those who have subjugated their loyalties, their careers, and their dignities to him.