Cop Who Said Trump 'Is The Last Hope For White People', On Trial For Making Hateful Remarks 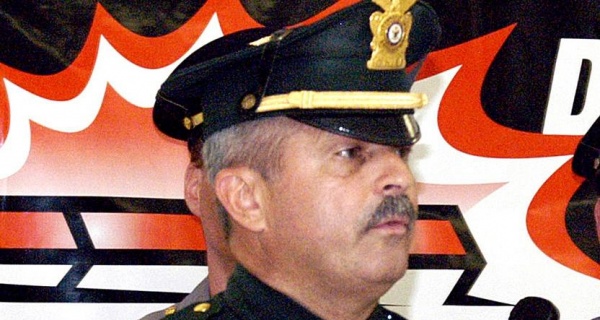 The former New Jersey police chief caught on recordings making hateful remarks against African Americans once shared his thoughts about the 2016 election while discussing the arrest of a black suspect.

“I’m telling you, you know what, Donald Trump is the last hope for white people, cause Hillary will give it to all the minorities to get a vote," former Bordentown Township Chief Frank Nucera said, according to a transcript displayed at trial. “That’s the truth! I’m telling you.”

Nucera’s federal trial on charges of hate crime assault and lying to the FBI entered its third day Wednesday with more testimony from the police K-9 sergeant who made dozens of recordings of his former chief.

Sgt. Nathan Roohr is federal prosecutors’ star witness in their case against Nucera, who resigned as Bordentown Township chief in Feb. 2017 when he learned the FBI was investigating him.

Roohr first took the stand Monday before Judge Robert Kugler in Camden federal court. Lorber played multiple recordings for the jurors, and Roohr testified to Nucera striking Timothy Stroye, a handcuffed suspect, when the Trenton teen had not paid a bill at the Ramada on Route 206 in Bordentown.

“Frank Nucera lunged his hand forward, grabbed Mr. Stroye, the side of his head like a basketball, and slammed it into the metal doorjamb as he entered the doorway,” Roohr said.

The comments about Trump came later, when Roohr brought up Stroye’s arrest to record Nucera talking about it. Nucera said he was “so tired of them” after mentioning Stroye’s family.

“I’ll tell you what, it’s gonna get to the point where I could shoot one of these [expletive].”

Nucera complained about Stroye’s girlfriend’s aunt, who was pleading with officers to be gentle.

He mentioned Trump after that.

To bring up the Ramada arrest without arousing suspicion, Roohr and the FBI settled on a ruse, or fake cover story, that the Stroye family was planning on suing the police department. Roohr would mention something about his wife hearing the family went to a law firm office to ask about filing a suit.

While Stroye was being arrested, he was saying he would sue the department, Roohr said.

In the conversation with Nucera, he brought up the alleged head slam and told Nucera the family was recording it.

“If they took that video and screen-shotted it with your hand on his head, that’s ugly,” Roohr says.

“Remember they’re the ones that started the fight and hurt Shawn, and Shawn went to the hospital,” Nucera said. “He was resisting.” The then-chief mentioned other police departments who responded - Springfield, Mansfield - “cause of six unruly f---ing [n-word]s.”

Another officer involved in the fight, Shawn Mount, testified Monday that he was in the “fight of his f---ing life” trying to arrest Stroye three years ago, according to reports. Nucera’s attorney, Rocco Cipparone of Haddonfield, had used that quote in his opening argument in the case.

“It was the first time [Mount] thought about reaching for this,” Cipparone said to the jury, miming a gesture where he unholstered a firearm.

Cipparone noted Friday that no use-of-force report was filed indicating Nucera used force in the Sept. 1, 2016 incident. The Force Report, NJ.com’s database of police uses of force in New Jersey, does contain reports from other officers at the arrest.

Trial on Wednesday began with Assistant U.S. Attorney Molly Lorber’s continued questioning of Roohr. Before 10 a.m. she ceded to Cipparone for cross-examination.

He went back through some recordings and admitted his own, casting Roohr as an employee disgruntled about money and overtime. At the beginning of one recording, Roohr can be heard vulgarly discussing female anatomy.

The recordings include Roohr’s attempts to discuss the head slam with other officers who responded to the Ramada. Cipparone also read portions of Roohr’s writings about the incident - alternately characterized as the “Bad Frank Diary” or, as Roohr later called it, the “Whistle Diary,” referring to the term whistleblower.

Cipparone plans to show dashcam footage from the Ramada incident overlaid with a recording Roohr made of officers watching that video. Assistant U.S. Attorney Lorber objected, and Kugler said there was no way to show that the footage lined up accurately with Roohr’s separate audio. Cipparone set it aside until that can be determined.

And jurors heard audio of Stroye when he was in the holding cell in the police station. Roohr asked him what hurt.

Cipparone expects to finish cross-examining Roohr on Thursday. Prosecutors said they plan to call Officer Anthony Nagle and perhaps another witness. Prosecutors are also reaching out to Terri Cowen, the manager of the Ramada, whose testimony Monday was suspended due to personal reasons.

The trial was postponed Tuesday when a juror called out sick.