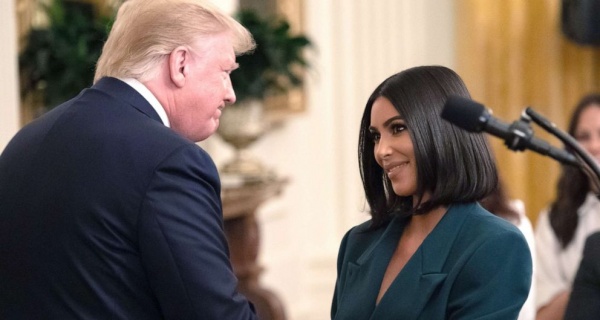 This week began with  Donald Trump lashing out at celebrities John Legend and Chrissy Teigen for failing to give him what he viewed as proper credit for signing a criminal justice reform bill earlier this year. It’s ending with Kim Kardashian West publicly praising the president for his efforts on The View.

Kardashian’s Friday morning sit-down with The View hosts started off very light, with a discussion about raising four kids while her husband Kanye West is on a “no help kick,” meaning no nannies. “A house of four is wild,” she said. “But complete. Very balanced, complete.” When Joy Behar asked her if that means “no more,” Kardashian replied, “That means absolutely no more.”

But soon, the conversation turned towards Kardashian’s newfound interest in prison reform, including her plans to become a lawyer without taking the typical law school route and the meeting she had at the White House with Trump leading up to the passage of the First Step Act.

“You got a lot of heat from a lot of people,” Meghan McCain noted before stressing that she believes in “bipartisanship on a basic level” and thinks “we’re not going to get anything done unless we’re listening to two different voices.” She asked their guest, “Were you worried about any backlash you were going to get because you did this bill with President Trump?”

“I definitely was aware,” Kardashian answered carefully. “But for me any of my issues have always been more about the people and not about the politics. And so for me to think that I couldn’t go and speak to the man that has the power to change people's lives because of some opinions I may have of certain policies and issues, to me felt very self-centered.”

“That I was more worried about my reputation than saving someone’s life,” she continued, referring to Alice Marie Johnson, who ultimately had her life sentence commuted by the president. “And so I put that all out the door, and I thought, you know what? I'm going to choose her over my reputation.”

After McCain commended the “amazing work” she’s doing, Kardashian made a point to give Trump credit directly, lest he decides she deserves a nasty tweet as well.

“I felt like I had an open opportunity to do that,” she said, “and from the president going from being really harsh on his stance on prison reform to changing and actually signing the First Step Act and getting that bill passed, was amazing.”