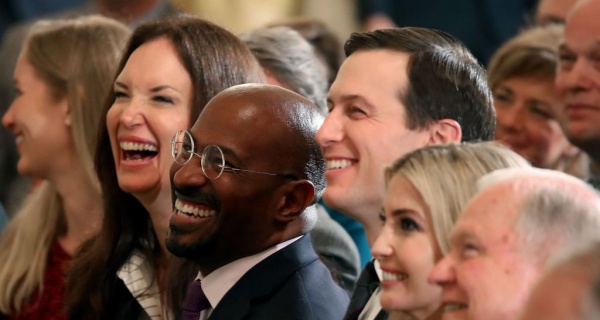 Van Jones has seemingly been swallowed up by the sunken place for a while now. From saying Donald Trump became “presidential” because he gave one coherent speech to giving “kudos” to Melania Trump because she stepped outside of her privileged bubble for less than an hour to visit the border, Jones has sounded less like his former boss Barack Obama and much more like Paris Dennard in recent months.

But all that has meant nothing to Trump, who turned around and slammed Jones on Sunday.

“When all of the people pushing so hard for Criminal Justice Reform were unable to come even close to getting it done, they came to me as a group and asked for my help,” Trump wrote in the first of a series of tweets targeting Jones and others. “I got it done with a group of Senators & others who would never have gone for it. Obama couldn’t come close…. A man named @VanJones68, and many others, were profusely grateful (at that time!). I SIGNED IT INTO LAW, no one else did, & Republicans deserve much credit. But now that it is passed, people that had virtually nothing to do with it are taking the praise. Guys like boring…..”

He continued, “Musician @johnlegend, and his filthy mouthed wife, are talking now about how great it is – but I didn’t see them around when we needed help getting it passed. ‘Anchor”’@LesterHoltNBC doesn’t even bring up the subject of President Trump or the Republicans when talking about he importance or passage of Criminal Justice Reform. They only talk about the minor players, or people that had nothing to do with it…And the people that so desperately sought my help when everyone else had failed, all they talk about now is Impeaching President Trump!”

John Legend and his wife Chrissy Teigen have never praised the racist-in-chief and NBC anchor Lester Holt has been an objective journalist. But Jones has praised Ivanka Trump, Jared Kushner, Trump himself and the entire Republican party.

In February, Jones spoke at the hateful Conservative Political Action Conference (CPAC) and reinforced a crowd of Trump supporters’ confidence in the president.

Those nice words came a few months after he gave the president glowing remarks for the humanitarian crisis at the border that included locking children up in cages.

“Give the man his due: @realDonaldTrump is on his way to becoming the uniter-in-Chief on an issue that has divided America for generations. Congrats to everyone on both sides who fought for this. #FIRSTSTEPact #CriminalJusticeSummit #CriminalJusticeReform #justicereform #Trump,” Jones tweeted in November of last year.

One month earlier, Jones interviewed Trump’s son-in-law Kushner, the senior White House aide whose qualifications have been questioned as much as his ambiguous job title. It was an embarrassing interview with comments to Kushner that included this gem: “You have like the dopest job in the world” and “How are we going to get peace in the Middle East?”

Jones’ worship of Trump on criminal justice is insane considering 45 rolled back Obama-era prison reform policies. For example, the Justice Department will use private prisons to house federal inmates, which reverses an Obama-era policy. In addition, as The Washington Post reported, the Trump administration has “Overturned the sweeping criminal charging policy of former attorney general Eric H. Holder Jr. and directed his federal prosecutors to charge defendants with the most serious, provable crimes carrying the most severe penalties reports.” President Barack Obama made more criminal justice reforms than any president in the U.S.

Trump also ended the 21st Century Task Force on Policing, commissioned by the Obama administration to address tensions between police and the communities they serve. Sessions and Trump rolled this back under their “law and order” mandate.

Jones has only doubled down on his worship of Trump and his family. Now he has gotten bit.