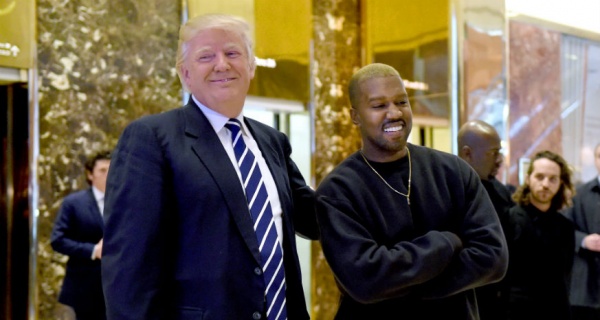 We need Black folks on both sides of the aisle — Democrat and Republican. However, being a supporter of a white supremacist is unacceptable. Our current POTUS has sympathized with neo-Nazis, disrespected gold star families of color, thought Frederick Douglass was still alive, known for language like “That’s my African-American over there!” and is advocating for policies that will damage Black and brown communities. Nonetheless, there are plenty of people who will defend him at any cost.

The actor had a respected career in multiple Spike Lee films and on ‘Grey’s Anatomy.” Well, he won’t get calls from Spike Lee anytime soon. Washington is now worshipping Trump and disrespecting President Obama. In April, he babbled on Twitter, “I voted for 44 twice. I even checked my emails in his Senate Office while lobbying for Salone to be given another chance to rebrand. Not once in 8 years was I given any support regarding Africa or the Black Agenda, but 45 invites me to the WH to celebrate the #FirstStepAct.”

How bizarre that Washington felt entitled to work with President Obama when he has a documented history working with African nations. As NewsOne reported, Washington doesn’t seem to know or care that Trump has actively rolled back Obama-era prison reform policies — and the First Step Act doesn’t restore those policies.

Washington was so outraged by our coverage of him attacking Obama and loving Trump, he tweeted us, see below:

@IWashington
I voted for 44 twice. I even checked my emails in his Senate Office while lobbying for Salone to be given another chance to rebrand. Not once in 8 years was I given any support regarding Africa or the Black Agenda, but 45 invites me to the WH to celebrate the #FirstStepAct

Bruh, you have no clout for us to chase. Why disrespect Obama with a Fox News talking point? Obama did his job without you.

Most recently, he “came out” is an official member of Trump’s cult on Fox News.

Eric Trump’s former party planner now works at HUD. She famously called April Ryan Miss Piggy and is working with Ben Carson to destroy HUD, but her most recent shenanigan is appearing at Cohen’s testimony to challenge Cohen saying Trump is a racist. She stood in silence, willing being used.

Pastor Scott is ride-or-die for Trump and is known to scream on television at anyone who disagrees that 45 is presidential perfection. Here is just one disturbing moment from one of his many television rants. He is actually defending Trump defending Nazis. Fix it, Jesus!

The singer is a passionate Trump supporter who was constantly on Fox News defending his madness. However, the tide has changed a bit. Now that she accused his former campaign manager Corey Lewandowski of sexually assaulting her, Fox News is dragging her. Nonetheless, we can’t forget this classic sunken moment, when Villa wore a “Make America Great Again” dress to the 2018 Grammys.

Social media lovingly calls him Uncle Ben. Mr. Carson loves him some Trump and his loyalty got him the bizarre position of the secretary of the Department of Housing and Urban Development. Yep, this is the title for a former neurosurgeon. There are so many sunken moments to choose from for Ben, but this moment, which shows Carson thanking God for Trump after the despicable tax bill was passed, is disgustingly unforgettable.

Ray Lewis is an NFL legend. However, he is tainting his legacy by being Trump’s BFF and slamming NFL players who kneeled during the National Anthem. Yet, when he knelled, he claimed, “I wasn’t protesting, I was praising God,” which was when Shannon Sharpe destroyed him on ESPN. W

If Ray Lewis is an NFL legend, Jim Brown is an NFL icon. In 2002, Sporting News named him the greatest football player of all time and now he appears to have been swallowed by the sunken place. The 82-year-old shocked us all by defending Trump to anyone who would listen, especially when he voted for Hillary Clinton. He believes Trump can magically give the Black community jobs, which is ludicrous — he can’t even hire a Black person for the White House senior staff unless it’s Omarosa.

A few times a week you could catch Paris Dennard getting dragged all over CNN. It was as if his brain had been lobotomized of all logic — Paris is convinced 45 is the messiah for the Black community. One of his best sunken moments of last was when Keith Boykin said he was “ashamed” that Paris as a Black man would defend Trump sympathizing with Nazis. However, Dennard is now fired from CNN after sexual harassment allegations surfaced.

The woman who once ran an anti-Trump site and called the NAACP a disgrace, even though they helped her win a lawsuit, is pro-Trump at any cost. She is the same person who once said the NRA is “the nation’s oldest civil rights organization” and was founded “to train Black Americans to use guns to defend themselves against the Ku Klux Klan, a Democrat terrorist group.” She also blamed the horrifying mail bombs back in October on Democrats, by tweeting then deleting, “I’m going to go ahead and state that there is a 0% chance that these ‘suspicious packages’ were sent out by conservatives. The only thing ‘suspicious’ about these packages is their timing. Caravans, fake bomb threats—these leftists are going ALL OUT for midterms.” Most recently, she was on camera saying Hitler just wanted to “Make Germany Great Again.”

The reality star turned Trump’s side-kick is arguably the ruler of the sunken place. She called for America to “bow down” to Trump, she attacked April Ryan and had a complete breakdown at the National Association for Black Journalists conference. Watch Omarosa in the widely parodied clip below, bawling because she lost her Black friends over supporting Trump. Even though she has said denounced Trump, we can never forget how she stood by his side for 15 years and only slammed him when she was fired.

The “Clueless” star was aiming for a congressional seat in the state of California and while “campaigning” she appeared on MSNBC and was asked about Trump’s vile comments on Charlottesville back in August. Of course, Dash agreed. This is one of many sunken moments from Dash. Shortly after this interview, she shut down her campaign but her loyalty for Trump hasn’t wavered.

Kanye met with Trump at Trump Tower on December 13, 2016. Of course, the two narcissists did a photo op with Trump telling reporters Kanye is a “good man” and they have been “friends for a long time.” Kanye later tweeted he talked to Trump about stopping the violence in Chicago and “I wanted to meet with Trump today to discuss multicultural issues.” By August of 2017, Kanye deleted all of his tweets defending his meeting with Trump. However, by April 2019, Kanye tweeted that he “loves” Trump, claimed they both had “dragon energy” and shared selfies in which he was wearing a Make America Great Again hat. He also appeared on TMZ and got his soul handed to him by Van Lathan for saying slavery is a choice. Kanye has never stopped defending the white supremacist.

We’ll get the prayer warriors out for all of you!