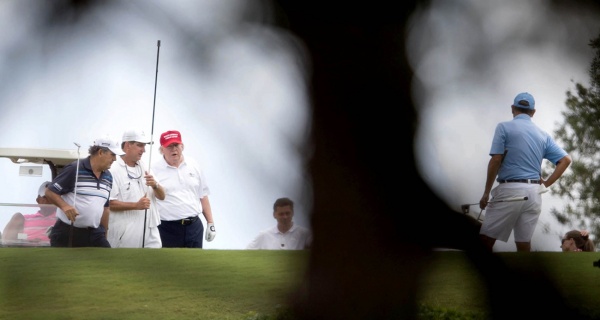 Lord help the soul who decides to call Donald Trump out on his compulsive golf habit, particularly if the soul happens to be a foreign critic of the president pointing out that Trump was golfing while supposedly monitoring a then Category 4 hurricane. “The incompetent Mayor of London, Sadique Kahn, was bothered that I played a very fast round of golf yesterday,” the president fumed on Twitter Tuesday morning, misspelling virtually every component of Sadiq Khan’s name before deleting it, correcting the error, and reposting. But that was hardly the point for Trump. “Many Pols exercise for hours, or travel for weeks. Me, I run through one of my courses (very inexpensive),” he insisted. “President Obama would fly to Hawaii,” he added, before suggesting that Khan focus on London’s “knife crime” epidemic.

Irony, as always, eluded Trump, considering how little attention he paid to another mass shooting in Texas over the weekend that left seven people dead. (Roughly 260 people have died in mass shootings since Trump became president.) Equally lacking in self-awareness was his comment about Barack Obama’s own golf habit, which constituted part of Trump’s early criticism of his predecessor. According to Forbes, Trump has spent over $100 million in taxpayer money on his hundreds of days at his own golf resorts—putting him on track to spend more than $340 million if he is elected to a second term.

The most recent golf trip in question—a somewhat unnecessary Saturday jaunt to his Virginia resort from Camp David via helicopter—took place after Trump canceled an overseas trip to Poland for a ceremony commemorating the start of World War II, ostensibly to monitor the landfall of Hurricane Dorian. Khan, who has been feuding with Trump since the beginning of the administration, couldn’t pass up the opportunity. “He’s clearly busy dealing with a hurricane out on the golf course,” he told Politico’s London Playbook, before going on to blast Trump for emboldening fringe nationalists. “[Trump] is a guy who amplifies racist tweets; amplifies the tweets of fascists; says things that are deeply objectionable. If I don’t stand up and call that out, I think I’m doing a disservice to Londoners who chose me as their mayor.” Trump didn’t respond to that part of Khan’s criticism.