Mitch McConnell Is Unhappy With His Nickname, 'Moscow Mitch' 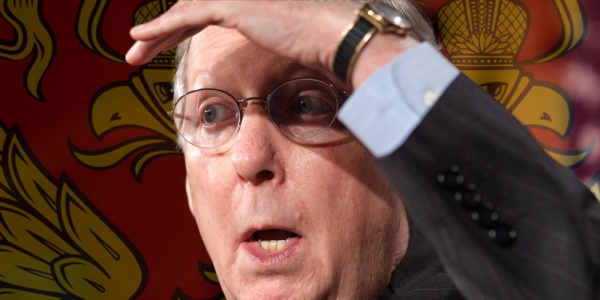 Senate Majority Leader Mitch McConnell really doesn't like being called Moscow Mitch, telling conservative mouthpiece Hugh Hewitt on his radio show, "Calling me Moscow Mitch is over the top." His feelings continue to be hurt.

There's a simple solution to that problem for him: put election protection legislation on the floor of the Senate and allow an up-or-down vote for it. That would shut his critics up about that one, anyway. That's entirely in his hands, as is all legislation that the Senate considers. He has tremendous power as gatekeeper to the Senate—power over life and death, which also came up in the interview.

Talking about the House-passed legislation to expand background checks on gun purchases, McConnell passed the buck to the White House. "The administration is in the process of studying what they’re prepared to support, if anything, and I expect to get an answer to that next week." That's his out. "If the president is in favor of a number of things he has discussed openly and publicly and I know we will pass it and it'll become law, I'll put it on the floor." Meanwhile, the White House is saying Trump can only support what will pass the Senate, which is entirely up to McConnell.

Continuing to flog his total abdication of responsibility, McConnell continued, "I said a few weeks ago that if the president took a position on a bill so that we knew we would actually be making a law and not just having serial votes, I would be happy to put it on the floor." In other words, this most recent gun massacre is not different than any other time masses of people have been slaughtered, and it's going to keep on happening while McConnell watches.

Just to round out his total lack of patriotism and his extreme partisanship, McConnell told Hewitt that he would "absolutely" fill a Supreme Court vacancy should one occur next year. "We're not going to leave a single vacancy behind by the end of next year," he said. "[Democrats] can whine about this all day long but under the Constitution there is co-responsibility for appointment. The President makes the nomination and the Senate confirms." He left out the part where that only happens on his watch when the president is a Republican.