G7 Summit: Trump Was Laughed At Behind The Scenes By World Leaders 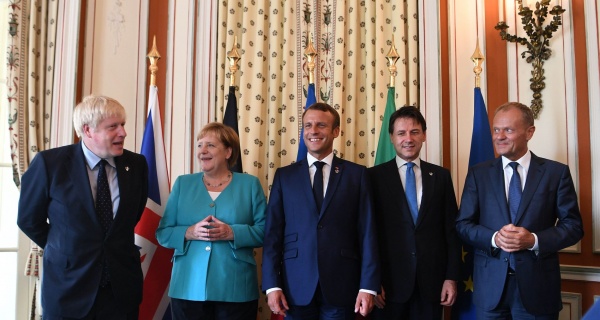 Donald Trump has returned home from his trip to the G7 summit in France over the weekend, and he clearly isn’t happy that he is now viewed as an even bigger laughingstock than when he arrived.

As MSNBC’s Chris Hayes pointed out on Tuesday night, citing The Washington Post, Trump spent the weekend advocating for Vladimir Putin and against global democracy, and other world leaders essentially told him to get lost.

As Hayes pointed out, while other world leaders were deciding whether to “assign any special weight to being a democracy,” Trump said no. When Trump was dismissed by them, he basically threw a tantrum.

“If there is one thing the president believes in private, says in public, and is attempting to shape American foreign policy around, it’s that democracy just isn’t actually a very good system, and he wants to make sure the world knows it,” Hayes said.

The entire 44-year vision of the G7 gathering, according to the non-U.S. participants, is to hash out global issues among like-minded democracies. So the discussion quickly turned even more fundamental, whether the leaders should assign any special weight to being a democracy, officials said. Most of the other participants forcefully believed the answer was yes. Trump believed the answer was no. The pushback against him was delivered so passionately, the U.S. president’s body language changed as one leader after another dismissed his demand, according to a senior official who watched the exchange. He crossed his arms, his stance became more combative. Here, there is a fundamental difference of views. Rough and tumble, said another. On Sunday morning, British prime minister Boris Johnson told French president Emmanuel Macron, pumping his fist, you did very well there last night. My god, that was a difficult one. Bien joue, the newly elected British leader said in private comments that were caught on an open microphone using the French phrase for well-played. If you wondered if it’s an act, it’s not. It’s not an act. In fact, if there is one thing the president believes in private, says in public, and is attempting to shape American foreign policy around, it’s that democracy just isn’t actually a very good system, and he wants to make sure the world knows it.

Trump has zero credibility on the world stage:

Donald Trump has absolutely no credibility on the world stage, and his performance and reception by other world leaders at the G7 summit was the latest evidence of that.

He has become so comfortable living in his Fox News-MAGA bubble at home that he simply doesn’t know how to behave like an adult human being when he’s surrounded by fellow democratic leaders who push back on his authoritarian tendencies.

Trump has taken to Twitter to clean up after his failed trip abroad, but the damage is already done. He once again turned in another embarrassing performance on the world stage, and – if it’s possible – other world figures seem to respect him even less.