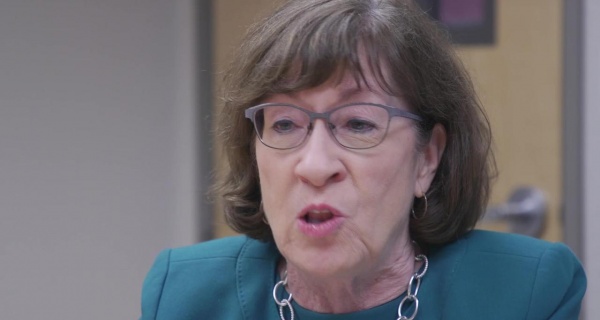 Sen. Susan Collins (R-Maine), gearing up for what she’s called a “tough race” for re-election in the United States Senate, acknowledged that she was “sad” that her support for then-Supreme Court nominee Brett Kavanaugh has cost her some votes.

After making no promises as to how she would vote given the sexual assault allegations against Kavanaugh, plus questions about his abortion stance, Collins eventually decided to vote in favor of Kavanaugh’s confirmation. The vote was 50-48 and Kavanaugh now sits on the Supreme Court.

“Have I lost some votes because of my decision to support Justice Kavanaugh? Yes, I have. And I’m sad about that because I explained in great depth my decision-making,” Collins told Politico on Monday. The “great depth” explanation Collins referred to in that quote appears to have occurred on Oct. 5, 2018.

On that day, Collins said that she believed Dr. Christine Blasey Ford’s testimony was “sincere, painful, and compelling” and that she was a “survivor of a sexual assault and that this trauma has upended her life.”

“Nevertheless,” Collins said, “the four witnesses she named could not corroborate any of the events of that evening gathering where she says the assault occurred; none of the individuals Professor Ford says were at the party has any recollection at all of that night.”

“Mr. President, we’ve heard a lot of charges and counter-charges about Judge Kavanaugh. But as those who have known him best have attested, he has been an exemplary public servant, judge, teacher, coach, husband, and father,” Collins continued. “Despite the turbulent, bitter fight surrounding his nomination, my fervent hope is that Brett Kavanaugh will work to lessen the divisions in the Supreme Court so that we have far fewer 5-4 decisions and so that public confidence in our Judiciary and our highest court is restored. Mr. President, I will vote to confirm Judge Kavanaugh.”

Collins is seeking a fifth term.