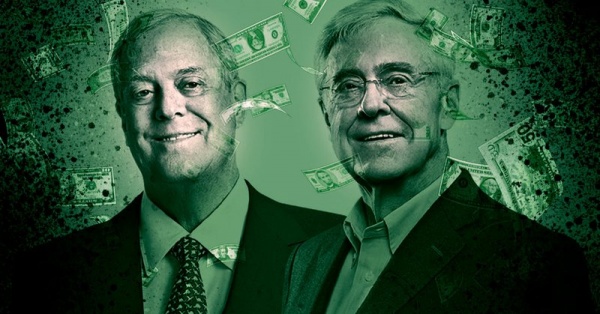 The passing of billionaire David Koch, announced Friday, already is inspiring retrospectives about the noxious influence he and his brother Charles have had on government policies — but it may be better to remember him for his real innovation in the sphere of public discourse.

That’s the creation of a network of moneyed donors so potent and ubiquitous that the voice of the individual voter has been drowned out.

The Koch brothers’ individual efforts to undermine policies on climate change and other problems are bad enough, but the system they pioneered bodes even worse for the future of American democracy. And let’s not ignore that this system has spread throughout American politics, with huge funding networks on the right and the left.

As muckrakers, including Jane Mayer and Christopher Leonard, have documented, the Koch network — the brothers and affiliated entities — spent some $900 million on political activities during the 2016 electoral cycle. The money was not only the brothers’, but came from like-minded millionaires and billionaires. But this army marched to the brothers’ tunes.

The siren call was for a world without regulation, justified by casting doubt on science in climate change and healthcare, among other topics, and fueled by pantsfuls of cash distributed through a vast web of tax-exempt entities.

“The Kochs, on their own, probably would not be able to have the kind of influence they have,” Mayer said in a radio interview following the 2016 publication of her book “Dark Money: The Hidden History of the Billionaires Behind the Rise of the Radical Right.”

She added: “What they’ve done is kind of a magic trick. They’ve attracted around them — they’ve purposefully built what they call an unprecedented network ... about 400 other extraordinarily wealthy conservatives with them to create a kind of a billionaire caucus.”

The harvest of the Koch brothers’ innovation is an American political system that lies supine at the feet of moneyed interests. The majority of lawmakers and presidents no longer even pay lip service to the idea of getting money out of politics or — perhaps more important — ending the secrecy that cloaks the identities of contributors to the torrent of cash. Why is Washington unable to pass legislation to fight climate change or eradicate the lethal gun culture, despite clear evidence that a majority of ordinary Americans are desperate to see action? Because big money is on the other side, and the Koch brothers were among the pioneers.

The Koch network includes the libertarian Cato Institute, which the brothers co-founded, and nonprofits such as Americans for Prosperity and Freedom Partners. They’ve spread their views via funding for university programs coast to coast, such as the libertarian Mercatus Center at George Mason University, a source of ideological attacks on Social Security and anti-poverty programs, including Medicaid, school lunches and breakfasts, and food stamps, which are almost invariably depicted as founts of fraud and waste.

(George Mason renamed its law school after the late Supreme Court Justice Antonin Scalia after receiving a donation of $10 million from the Koch brothers and $20 million donated via the Koch-funded Federalist Society, which also vets conservative lawyers and judges for appointment to federal courts.)

Koch donations to academic institutions typically come with ideological blinders attached, as when the University of Utah accepted a $10-million donation from the Charles Koch Foundation to establish a free-market economics program to counter the ostensibly Marxian bent of the university’s economics department.

The Koch network funds organizations such as the State Policy Network and the American Legislative Exchange Council, which promote conservative legislation, such as tax cuts, deregulation and “stand your ground” firearms laws at the state level.

The Koch network’s enduring concern has been the regulation of fossil fuels to address climate change. As Leonard observes in his just-published book “Kochland: The Secret History of Koch Industries and Corporate Power in America,” these regulations struck at the heart of the natural resources business of Koch Industries, the brothers’ closely held corporation.

The seminar featured “scientists who questioned the prevailing view that humankind’s carbon emissions caused the Earth to warm,” Leonard reports. Among them was Richard S. Lindzen of MIT, who was quoted in the seminar brochure stating there is “very little evidence at all” for “the notion that global warming is a fact and will be catastrophic.”

The attendees were feted at the White House by staffers for George H.W. Bush, whose announcement that he would consider signing a treaty to limit carbon emissions had inspired Cato to launch the seminar.

The Koch network’s reach is illustrated by an agenda for a 2014 “donor summit” sponsored by their Freedom Partners and published by the Nation and subsequently by Kochdocs.org, which collects documents pertinent to the network.

Among the speakers were then-congressman and now U.S. Sen. Tom Cotton (R-Ark); long-term GOP official Marc Short, who later would be director of legislative affairs for President Trump and chief of staff to Vice President Mike Pence; and Senate Majority Leader Mitch McConnell (R-Ky.), who was then in the minority.

The agenda topics included “Saving America: Our Fight to Advance Freedom and Reverse the Country’s Decline” and “Energy: Changing the Narrative.”

“The Kochs have built kind of an assembly line to manufacture political change,” Mayer said in her radio interview. “It includes think tanks, which produce papers. It includes advocacy groups, that advocate for policies. And it includes giving money to candidates.” On all three fronts, she stated, they push climate change denial.

In coming days, no doubt we’ll be reading about all the issues on which David Koch, his brother and their comrades in arms have exerted influence for their benefit and at the expense of ordinary people. Let’s not overlook that the financial machine they created also prompted the creation of a financial machine in opposition to their interests. The total effect is to create an electoral system awash with self-interested money, with no countervailing pressure in sight.

We are all paying the price, and will continue to do so into the limitless future.